“The Way Back” by Carter Quinn 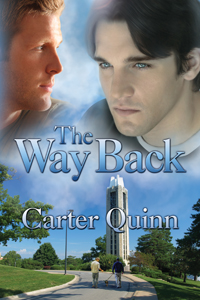 Title : The Way Back

Blurb : Riley, Jason, and Eric have known one another since their University of Kansas student days. Riley has been in love with Eric and had his heart broken by him. Stalwart and kind Jason is Eric’s older brother and has been there for Riley when he needed help mending his heart. Riley, Eric, and Jason have a tangled web of secrets, hurts, choices and in due course finding out what is really in their hearts.

Review : Carter Quinn is a new author although his writing certainly belies his newcomer status. I enjoyed the story of Riley, Jason, and Eric, which is told from Riley’s POV. Carter has imbued Riley’s character with humor, vulnerability, complexity, but ultimately strength and determination. He is a little irrational from time to time, but I loved him for his confusion as well his sensitivity. Riley’s heart was broken six years earlier by his college friend and then lover Eric. Years later he is still wary of giving his heart for fear of getting hurt again. I think Carter gave us a character we can easily relate to as readers.

Jason and Eric are also fully developed complex characters. Jason is sexy, strong, giving, and tender. It’s easy to fall in love with the guy, but the wonderful thing that Carter did in this story is not make him perfect. You root for him but there are times when you want to thump him upside the head as well. Then we have his brother Eric, who is sex on wheels, and it would be easy to fall into the trap of making him an unsympathetic character due to the heartache he’s caused. However, the author has written a multilayered story that gives the reader deeper insight into the motives and reactions of each of these characters.

It’s refreshing to read a story that isn’t offering pretty heroes and predictable dialog. With that said I think new authors with the best of intentions draw out their story a little longer than necessary in an effort to make it complete.  I think “The Way Back” could have been pared down just a (tiny) bit because I found myself (towards the end) thinking – guys, let’s get it together and get on with it already. The angst (as much as we love it in romance) was drawn out a little more than necessary for me. I like angst in a romantic story but a little goes a long way or it becomes a soap opera.

Overall, “The Way Back” is a great beginning for a new author. The story faults are minor ones and easily overlooked. I enjoyed the story and each of the characters. The sexual scenes were exceptional and sizzled off the pages. Carter has a gift and he will just keep getting better. I look forward to reading more from him in the future.

9 thoughts on ““The Way Back” by Carter Quinn”