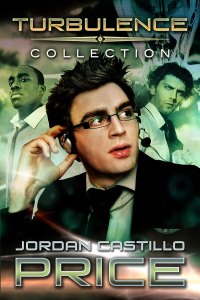 The foundation of superstition is ignorance. First Officer Paul Cronin has no use for magical thinking—he’s a logical guy, a skeptic who only believes what he can see. When a new assignment on Flight 511 takes him directly through the legendary Bermuda Triangle, he’s not concerned about losing his aircraft to supernatural forces. He’s busy trying to hook up with handsome flight attendant Dallas.

Dallas seems eager to oblige at the airport, but his ardor cools quickly when he finds out he and Paul are now on the same crew. Then the turbulence hits, and Paul soon discovers there’s more to the Bermuda Triangle than made-for-TV movies.

While trying to decipher his cryptic predecessor’s notes and guide Flight 511 around the Triangle phenomenon, Paul attempts to piece together a relationship with Dallas. It seems that forces—both paranormal and mundane—are stacked against them. Can Paul navigate a successful course through the turbulence while he finds a way into Dallas’ heart?

I’m still basking in the afterglow of this series.  I first began the Turbulence books back in May.  I read the first four as soon as they were available then stalled.  I read the final four in one night.  I’m still processing the experience.  Paul Cronin is an AVA pilot on a new assignment.  He needs a change.  Dallas Turner has had change thrust upon him by the suicide of his usual pilot, Marlin Fritsch.  Paul was fully incapable of conceiving of the kind of change that was impending, because in his mind the Bermuda Triangle is a bunch of craziness.  There are reasonable explanations for everything.  Then he hit the turbulence and entered an empty Bermuda with Dallas and their flight Captain Kaye Lehr.  The Bermuda Triangle is completely real.  Paul has some trouble coming to grips with this.  Despite liking Dallas, who is the flight attendant, he needs to get away to deal.  Unfortunately Paul doesn’t really have a good network of friends to help him deal.  He’s not at home when he’s at home.  Paul has no choice but to deal with the fact the Bermuda Triangle is real.  Real!  Meanwhile Dallas is still dealing with his friend Marlin’s suicide.  Marlin had been trying to solve the mystery of the turbulence while Dallas has been dealing with the “autopilot” versions of anyone who stays in the cockpit.  They’re embodiments of some aspects of the person’s personality.  He’s also watched his niece, of whom he has custody, graduate and go to college.  Dallas has been left behind.

Paul decides his only choice is to continue to pilot the daily AVA flights to and from Bermuda.  He also feels compelled to research all Marlin’s compiled data.  Paul turns to Dallas, not only for help in solving the riddle of the turbulence, but for a place to belong.  Paul’s autopilot has no qualms whatsoever about wanting Dallas as his “man.”  Dallas being forced to wrangle both Paul and Kaye’s autopilot’s every night leads to the most hilarious and effective “not tonight honey” excuses I’ve ever heard.  Lucky for Dallas, the autopilots never seem to notice they get the same excuses every night.

The budding relationship between Paul and Dallas is something of a shock to their friends and family.  Paul is white, Dallas is black.  Paul’s friend doesn’t deal well.  Dallas’ family is more accepting.  They find themselves developing an even closer emotional bond as they continue to work to uncover Marlin’s research.  Ultimately the research leads to Paul making a decision that could destroy everything he’s built with Dallas.  Or it could solve everything.

Paul and Dallas found each other at the perfect times in their lives.  Both men needed what the other man was offering at the time it was being offered, as though forces beyond their control were pulling them together.  They were.  Those forces were helped by Ava, the lady who works in scheduling.  Strangely, even the experiences Dallas had with Paul’s autopilot in Bermuda helped the relationship along.  Paul’s autopilot was a really nice guy.  Okay, he was kind of a horn dog, but he was genuinely nice.  He cared deeply for Dallas.  Being aware that the autopilots are simply facets of the cockpit crew members, Dallas was able to make the leap into a relationship with Paul.

Marlin was also an interesting character despite his suicide.  Along with Captain Kaye he was another distinct personality involved in the deconstruction of the mystery of  the turbulence.  They comprise a classic four temperament ensemble.  Each is needed to balance and complement the others.  The fact I just wrote those sentences is one of the reasons I love Jordan Castillo Price.  In addition to that she is an author completely willing to take risks in her writing in a field where most people stick to a generic romance formula full of manufactured angst and tried and true tropes.  Not that I don’t thoroughly enjoy that formula and those tropes.  There just has to be more than formulaic trope filled books.  I love dinner everyday.  On holidays I love a feast.  Jordan’s books are a feast.

If you leave a comment here, you will be in the running to win a copy of “Turbulence Collection” by Jordan Castillo Price. Good Luck!