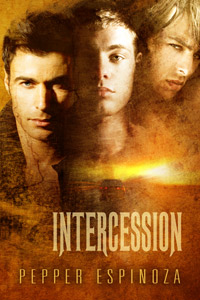 After fifty years of searching for his lost brother, vampire David Derringer attempts the unimaginable: he bends his knee in prayer. While he doesn’t believe, his mother’s faith was strong, and her final request—a request made the night she and David died—keeps David on the path to his younger brother, Danny, despite the many obstacles.

Jophiel is tasked not only with helping David find his brother but with saving David’s soul. It seems like an impossible assignment meant to punish him, especially when they must face the Brotherhood of St. Rocco, an organization dedicated to eradicating vampires.

But David has a chance to prove he’s not like other vampires when he meets Arthur, a young man with a secret and a death wish. Following a very steamy encounter, Arthur expects to be bitten. David never even drops his fangs. Which is a good thing, since Arthur might be the key to finding Danny before it’s too late.

Intercession- the action of intervening on behalf of another.

Intercession was a perfect title for this book. It starts with David praying to God to help him find his brother, Daniel. The hope of finally being reunited with his brother is the only thing keeping him from turning into the mindless killing machine he should be. David is a vampire. Vampires in this world are not nice creatures. They’re Lucifer’s children and he uses the spread death and terror all over the world.

God hears Daniel’s prayer and sends Jophiel to help him find his brother. Jophiel is an angel but just a foot soldier with a shameful past. He thinks God is punishing him further by sending him to help an evil vampire. He does as he’s told and sees something in the vampire he never expected. A tiny glimmer of his soul is still there. Vampire’s souls are voided from the moment they’re turned. From there we go on a road trip cross-country with a vampire and an angel in which Daniel and Jo don’t exactly become firm friends but they get to know and like each other. Along the way Daniel sees Arthur at a bar and decides to make him his meal for the night. Screwing the guy before he kills him isn’t anything new but he feels something for Arthur. Something he hasn’t felt in a long time, intense lust and a need to protect him, but from what? Jo finds them naked and entwined the next morning and starts to understand lust. He also realizes that Arthur should be dead after a night with Daniel which gives him hope of saving his soul after all. Jo hasn’t ever known physical human pleasures and his desire for Daniel confuses him. Soon they realize they were set on a path to meet Arthur and he becomes part of the quest. Just about the time they all agree on this, Monks descend upon Arthur’s house. Monks are an army of vampire killers given the blessing of God to eradicate their evil from the Earth. Problem is, over the years the purity of the order has become tainted and innocents are considered casualties of war. When they come after Arthur it changes things. It forces the men to face feelings none of them thought were possible when the week started. Things evolve, questions are answered and realizations are made leading to an ending I didn’t expect.

I liked this book. I thought the world building was great. Each guy had a story that unfolded as the book went along. I love a good vs evil book. We get vampires and angels in this one which alone would make me interested in reading it. I enjoyed some of the twists and turns that kept me needing to know what’s next.

What this booked lacked, for me, was the romantic storyline. It was all believable but was presented like it should have been this intense need for the men to be together but I just didn’t feel that. There were moments between Jo and Daniel, or Daniel and Jo but the transition to a three-way love affair just didn’t come together for me. I will admit to not being a fan of m/m/m but this one didn’t bother me which is impressive for those who know my tastes.

I think the thing that made me absolutely have to read the next book was that damn ending. OMG! It’s so evil when authors leave us hanging but I have to say this was a good one. I have high hopes for the next book. 😀

← Some Kind Of Magic : A Being(s) in Love Story
Two Lips, Indifferent Red →