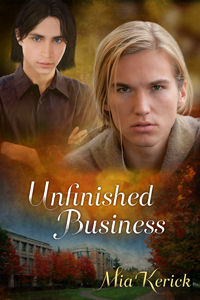 After struggling through dishonesty, betrayal, and the kind of pasts they’d like to leave behind them, Brett Taylor and Cory Butana are back together and starting to build a new life. Brett has a good job. Cory has started college. But not everything goes the way they planned.

Still recovering from the emotional and physical repercussions of a brutal assault, Cory finds himself trapped by his own insecurity and fear, unable to believe that his heart is safe with Brett or that his body is safe without him. On the other hand, Brett has total faith in Cory’s love and commitment, even though he still struggles with his own ghosts.

With girls flocking to Brett’s side and a wannabe-lover lab partner feeding his doubts, Cory can’t find a way to tell Brett about the unfinished business that haunts him. If Brett wants to save him, he’ll have to see through Cory’s deception in time.Tags – contemporary, romance, college, coming of age, suspense

This is the second book in a series that must be read in order to gain a full understanding of Brett and Cory and what they mean to each other . The story continues immediately after the events of Beggars and Choosers, and is a wonderfully satisfying continuation of the beautiful and deeply committed relationship between Cory and Brett.

My biggest overall impression of this book was that I loved how it focused so much on the relationship. And it did so without stalling out, getting sappy, or involving over-the-top emotional drama. It is a story about two young men discovering their own separate strengths while cementing their bond. 🙂

The story is told using the alternating POVs of Brett and Cory (and occasionally some of the secondary characters). I’ve read plenty of books where alternating POVs are utilized and do not work at all, however that is definitely not the case here! Same goes for literal use of dialect/accent. The author in this instance utilizes alternating POVs and a strong dialect (Brett) with absolute sterling results. Each character has a distinct voice and with Brett especially, I felt as though they were sitting right in front of me telling their story. Brett’s voice, and, – let’s face it – Brett overall, won my heart in Beggars and Choosers and that feeling was definitively solidified in this sequel.

This story begins with Brett and Cory moving into a cozy studio apartment together near the campus where Cory will be attending college. They have an awesome purple comforter on their bed. 😉 Brett has secured a job managing a bar/restaurant on campus. Due to the assault on Cory the previous summer, Brett is protective of Cory and always walks him to and from each class, to the library, and to the apartment, even scheduling time away from the bar to do so. Cory absolutely consents to this and doesn’t consider it as controlling at all. In fact, it really touched my soul to hear their inner dialogues about what this level of care and concern meant to each of them.

New people that meet Cory and Brett don’t necessarily see this behavior as loving, nor do they know the history behind it. Ian – an attractive, spiky haired, dressed all-in-black dude, who takes an immediate interest in getting to know Cory better – sees Brett’s constant “bodyguard” routine as smothering, controlling, and possibly bullying.

**Spoilers ahead** Generally when I review I avoid major plot spoilers, however I don’t know how to expound on why I loved this book so much without going there. As mentioned above, Ian is someone who becomes interested in Cory and he comes with his own group of friends who happen to all be on the football team. Ian begins to publicly question Brett’s sexuality and real reasons for being with Cory – women in the bar trip over themselves coming on to Brett not “seeing him” as gay at all. One in particular likes to press Brett, constantly telling him “you are so straight”. So, the couple has to deal with potential “competition” as well as other every day issues that arise within their relationship.

About that….Actually, Brett and Cory’s relationship is great – they pledge commitment – Brett gives Cory a ring and they become engaged before their first experience of full on lovemaking. Afterwards, they start calling each other “husband”. I found this to be very heartfelt and sweet.

Throughout the book, the author kept me guessing about what was going to happen next. This sure makes for page turning!! Was Ian going to cause trouble between Cory and Brett? Was some woman going to cause a problem for Brett? Was Cory going to allow Ian’s doubts about Brett’s sexuality to undermine what he knew (or thought he knew) to be true? Was Cory perhaps going to say/do something to cause Brett to cut him loose to experience other men? (Even though this would devastate Brett, he would do anything to make Cory happy). Was Cory’s attacker from the previous summer going to resurface? The author had me wondering about all of these aspects.

Cory finds a new friend in Ally, the girlfriend of Ben, one of the football players. He also gained some confidence by going jogging and to some functions such as self-defense classes with her, without Brett escorting him. Brett is proud of his work – he gets praised by upper management and clientele alike. This was really good for his feeling of self-worth, especially since he felt so much blame for what had happened to Cory in the past. Then Brett’s loser of a Mom showed up and he was forced to re-visit all of the abuse he suffered at her hands as a child – although some good came of it as he finally opened up to Cory with details of how she abused Brett as a child.

The integrity of Cory and Brett never truly wavered. They only became stronger separately and as a couple. Issues arose and were dealt with head on, with real honest to goodness mature conversation and great use of dialogue. Gasp!! Love, love, love, how Cory actually spoke to Brett about the doubts that others had raised regarding Brett’s sexuality and reasons for being with Cory. Brett’s response is achingly pure and honest and wonderfully addresses whether one needs to label one’s sexuality. I also love how Brett and Ian had a truly great heart to heart conversation about Cory, and Ian ended up being a true friend to them both. The guys on the football team proved to be a good bunch as well. They all became closer by paying attention, valuing what others have and actually having frank conversations!

Midway through the story, Cory starts receiving threatening e-mails. He knows they must be coming from one person, and one person only – Stephen – the man who assaulted him. He doesn’t tell Brett. Here is where you might be thinking, what? You’ve been saying how close Brett and Cory are, and how well they communicate, how could he not tell him? Here is where the author has done such a remarkable job of defining the characters. It rings true and entirely plausible that Cory would not tell Brett about this one thing. He becomes utterly terrified of the idea of putting Brett in direct danger.

Sure enough, one night when Brett goes to pick Cory up at the library, Cory is missing but his backpack, laptop and phone are still there. Brett starts freaking out but is able to enlist the help of Ian, Ben, Ally and their other new-found friends. Ally recalls Cory being upset about some e-mails, so Brett checks his computer. What they find makes his blood run cold, as he then knows that Cory’s assailant has come back for more. In working together they are able to figure out how to locate Cory. In the meantime, Cory is calling on some of his newly discovered confidence (and his self-defense lessons) to help get himself out of danger. This is the climactic, action packed, heart racing part of the book. It also served as a way to tie up the fact that Stephen had still been on the loose and his presence had been with Cory and Brett every day, even prior to the e-mails. His sick desire to come back for Cory ended up with him being locked away. It also served as the ultimate showcase for how closely connected the characters all were and how they were able to come together and help one another. Brett and Cory’s love came shining through.

The story ends on a very romantic and satisfying note. J It’s also nice to note that Cory’s Dad, Roderick, continued with his cleaned up ways in this book and was there for Cory.

Certainly hope to get more about these two as they experience life together. Definitely more story could be told with regard to Brett’s past and his Mom popping back into his life again. Maybe Ian could even have his own story and happiness.

I highly recommend this story and it’s prequel – Beggars and Choosers. And.. dang, look at Brett on the two covers. I’d be checking him out too 😉

← The Heracian Affair
But Not For Me →

One thought on “Unfinished Business”