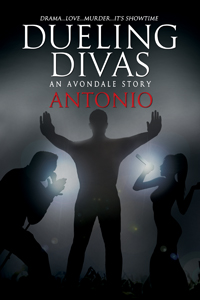 The Next Club Superstar contest is just the venue Nash Argento needs to further his career as a singer. There’s only one problem: he has to dress in drag.

With the help of his best female friend, Nash negotiates the challenges of becoming a drag queen in order to compete. But his troubles are far from over. His key competitor is Stacey—a biological woman. Incensed, Nash tries to get her disqualified, but Stacey is desperate for the money, and with the help of her quirky divorcée best friend and the best friend’s lawyer, she manages to stay in the contest.

Bobby Carter is a lonely librarian looking for Mr. Right—and he’s looking in Nash’s direction. Nash seems to be everything Bobby needs… and then he brings Nash home for dinner and discovers Nash is his sister’s main competition. Nash and Stacey get to know each other and even become friends—and just in time. Someone is murdering the contestants one by one, and Nash and Stacey will need all the help they can get to escape the cruel fate the murderer has planned for them.

Nash and Bobby meet on The Next Club Superstar competition night. Nash is competing in the contest for $10,000 and a recording contract. Bobby, who lives in an apartment on his sister and brother-in-law’s property, is supporting his sister Stacey in the singing competition. Nash challenges Stacey’s right to perform, trying to get her disqualified from the contest and the story takes off. The competitors, who are desperate to win, are excellent singers who find themselves tied after the first night. At that point, each realizes who their real competition will be until a winner is picked.

The next day Bobby takes his niece Meggy to the grocery store where they run into Bobby who works there. When Bobby sees Nash, his reaction is, “Wow,” and the fireworks between these two spark. This is surprising because Bobby’s love life has been stalled. He works as a librarian and dreams of “true love.” Once he meets and gets to know Bobby, he believes Nash could be “the one.” As Bobby and Nash fall in love, their world becomes complicated. Bobby has never had to come out to his family, but when he meets his sisters’’s competition, he knows it’s time. And, as the contest heats up so does the body count, because someone is killing the competition and no one is safe. Realization dawns that they will have to accept, trust and rely on one another.

This author weaves several lively plot lines throughout the book that include coming out, religious zealots campaigning against gays, friends and family accepting the appearance of a significant other, the relationship trials of several other contestants and an ongoing murder mystery. The dynamics among Stacey, Stacey’s husband, Nash, Bobby, the contestants and rest of the large cast of other characters are so much fun to read.

We get to experience the twisting camaraderie among the characters that includes bitching, backbiting, friendship, humor and unity as the group clasps tight in a protective embrace to keep each other safe.

I loved this writer’s charming, colorful characters and their interactions. I loved Nash and Bobby. I got a huge kick out of Bobby’s little niece, Meggy, calling Nash “Mr. Wow.” I loved the family dynamics in all of the groups as their safety becomes the paramount issue. Although it was somewhat predictable, I enjoyed the mystery and it worked well in the story context. I think readers will enjoy these charismatic characters, the wonderful atmosphere in each of the contest venues as well as the love affair between Bobby and Nash.

I read this book twice. I did it because I had problems with the continuity editing. I wanted to be sure of my first reaction and I am. In the book, there are times that a storyline stopped abruptly and moved to another storyline for a paragraph or two and then jumped to another one. No warning, no transition. I think editing could have smoothed these instances so I was not pulled completely out of the story and forced to backtrack to pick up the story thread. This is a complicated, but highly readable book. I think content editing could have produced a more polished work.

That said, I am really looking forward to reading more of this author’s highly imaginative work.

← The Art of the Deal
Small Miracles →