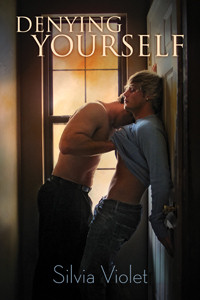 Matt and Shane both have secrets. Matt never believed he was anything but straight, yet he’s increasingly attracted to his best friend. Shane is comfortable with being gay, but when he discovers he’s part werewolf, he hides that part of himself, fearing Matt’s reaction. Suffocated by his uptight parents and conservative hometown, Shane begs Matt to run away with him.

But starting over doesn’t help. Matt still denies his desires, and Shane abuses alcohol to dampen his wolfish urges. When Matt breaks down and kisses Shane, the pent-up passion proves too much for Shane’s self-control, and his wolf gets free. Horrified, Shane flees—into deeper trouble. Before they can hope to accept each other, Shane and Matt must accept themselves.

This book left me all swooney and happy. I was sucked from the first few pages. Matt and Shane were just meant to be together. This is one of those hard-fought roads to love for a love that was there from the start. Really tragic but beautiful.

Shane moves to a small town in high school. He’s out and that puts a target on his head. Shane is stronger than he looks and able to handle whatever the bullies want to throw at him but his real strength comes in his friendship with Matt. He has no idea why Matt sat down next to him that day but it’s the best thing that’s ever happened to him. When Shane learns a scary secret about himself he knows he has to leave as soon as he graduates. Based on his parents rejection he doesn’t want to chance telling Matt he’s a wolf. He manages to coerce Matt away from his family and they move out-of-town for a fresh start.

The fresh start doesn’t go as smoothly as they think it should because Shane is keeping two secrets. The first that he’s in love with Matt and the second is that he’s turns into a wolf. Matt knows Shane has feelings for him but he’s struggling with admitting his and avoiding the topic is the only way to keep things safe. Fighting his wolf and desire for Matt push Shane further into his alcohol abuse. He’s spiraling out of control but Matt is always there to pick him up. One night things change. Matt and Shane give into their lust. You think, FINALLY but Matt loses control of his wolf and runs off to self destruct thinking Matt can’t possibly forgive him this time..

This is where it gets rather painful. Shane hits rock bottom but a kind stranger gets him off the streets and sets him on the path to save himself and back to Matt.

I loved this book. I stayed up way too late because I just had to know Shane and Matt found their way back to each other. Yes, it was a hard road but throughout the book there was this underlying thread of hope that had me barreling through the book. The cover is gorgeous! I’ll be honest and admit I’m a sucker for a “first love” story. This was that and a wonderfully heartwarming journey of the two guys coming to terms with who they are and what they want. I highly recommend it.

3 thoughts on “Denying Yourself”