The Fight for Identity 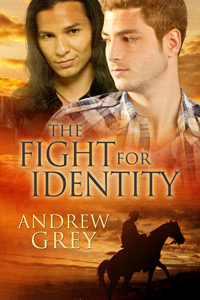 Title : The Fight for Identity

Series: A Book in the Good Fight Series, Book 3

Will Martin’s racist father, Kevin, hates Native Americans and wants to keep them off his property, never mind that part of the ranch land is sacred ground for the Sioux. When they request access for prayer, Kevin refuses—but Will doesn’t share his father’s views. Ever since he first saw Takoda Red Bird during one of the Sioux sacred ceremonies, Will has been fascinated. He grants the tribe access.

Takoda defies Kevin on a regular basis. He often sneaks to the sacred site on the rancher’s land for prayer and knows Will has seen him there. When, out of spite, Kevin places the land up for auction, Takoda knows it is time for action and bands together with Will to stop the sale.

In the fight that follows, Will gets more than he expected. He starts out helping the tribe preserve their identity… and ends up finding his own.

Andrew Grey has once again gave us another 5 star book. The Fight For Identity is number 3 in The Good Fight Series and in my opinion the best so far.

Will Martin was fifteen when his father moved them to his grandfather’s ranch. This was when he first saw the Native Americans perform their ceremony, and this was the first time he really saw how much hatred his father held for these people.

Eight years later Will comes across Takoda Red Bird out on his father’s land and against his father’s wishes invites him and his people to once again hold their ceremony there.

From there this story takes us on a journey of love, heartbreak and forgiveness.

Takoda and Will share something so special that when they see each other as young boys, you just know that they were meant to be together. When a young Takoda is speaking with his grandfather he asks “How do you know when you’ve met the person the spirits have destined for you?” His grandfather set his tools on the ground. “So it’s finally happened. You’ve met someone who stirs your heart.” His grandfather smiled slightly. “I was beginning to think your heart had been so hurt that it would never happen. You need not tell me who she is; that’s not important.” His grandfather suddenly appeared peaceful. “I cannot answer for everyone, but my advice is that you will know her because she knows your mind and your heart almost as well as you do.” Kunsi picked up his tools again. “She’ll know you so well she’ll almost be able to read your thoughts.” Replace the she for a he and that pretty much sums up Takoda and Will. I actually thought about this part of the story through the whole book and wanted to share it with you. Two souls destined to be together no matter what comes between them. *sigh* I’m such a sap. 🙂

The reason for Will’s father’s hatred surprised me. I expected something completely different and was surprised at myself for being on his side when the reasons were revealed. Not that I condoned his hatred or the way he handled himself with the Native Americans because he was so awful but the reasons behind it were valid and sometimes we get a bit carried away when it comes to the people we love.

I’m always amazed when I finish a book by this author. He writes his stories with such passion and the details are so vivid I swear I feel like I am right there with these characters. I don’t know if he plans to write anymore in this series but if he does you can count on me to be first in line to read it.

← Heatstroke
In Search of a Story →