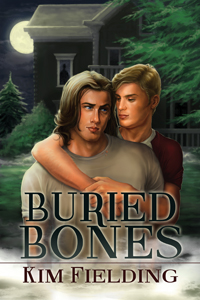 Werewolves don’t have a how-to manual—nor do men embarking on a new life together.

It’s been a few weeks since Dylan Warner wolfed out and killed Andy, the crazed werewolf who originally turned him and later tried to murder Chris Nock. Architect Dylan and handyman Chris are still refurbishing Dylan’s old house as they work out the structure of their relationship. They come from very different backgrounds, and neither has had a long-term lover before, so negotiating their connections would be challenge enough even if Dylan didn’t turn into a beast once a month.

To make matters worse, Dylan’s house is haunted, and events from both men’s pasts are catching up with them. Dylan has to cope with the aftermath of killing Andy, and Chris continues to suffer the effects of a difficult childhood.

In his quest to get rid of the ghost, Dylan rekindles old friendships and faces new dangers. At the same time, Chris’s father makes a sudden reappearance, stirring up old emotions. If Dylan and Chris want to build a lasting relationship, they’ll have to meet these challenges head-on.

This is the sequel to “Good Bones”. The two books really must be read in order to fully appreciate the characters and their relationship arc.

This book takes place roughly one month after the end of Good Bones. Dylan and Chris are slowly, yet steadily, finding their way through new relationship territory. I love these two incredibly likeable guys! They have such an easy, flirty, loving way with each other – it’s just as fun and enjoyable to read about them doing mundane things like staining a floor, fixing dinner, or discussing the weather as it is to read their wolf transformation or lovemaking scenes. The dialogue and chemistry between them is indeed that terrific. The author definitely has a penchant for presenting well drawn characters.

While the guys do have an easy symbiosis going, we also see that they are both harboring insecurities about their future together. They each want to make a full commitment, and they both long to call Dylan’s house their home – they just need to figure out how to tell each other this! Chris still has issues with being unworthy of Dylan, and Dylan still has issues with subjecting Chris to his pesky and dangerous monthly alter-ego. Throw in the appearance of a meddling ghost, Chris’ long absent father, an “ex” of Dylan’s, a ouija board wielding grandma, and a decidedly un-neighborly wolf pack, and you have the mix for a highly entertaining story.

I felt the author did a great job of taking the spotlight off of the fact that Dylan is a Werewolf, while still treating it as a reality and an obstacle in Chris and Dylan’s lives. It’s impressive when an author can create such a fresh feel from an oft utilized trope! By bringing together many unresolved issues, we are shown that all of the characters have issues to work through. These include Dylan’s resolving the death of Andy and his hatred for him, and Chris facing his father and his hidden emotions for him. Buried Bones becomes a very clever title to be sure. The sexual chemistry between Dylan and Chris is ever present and steaming hot. Some particulars of their sex play seemed a little out of left field to me at the end of the story though– a minor detriment in an otherwise great read.

Kudos to Kim Fielding, and once again, I love Chris and Dylan. More please!