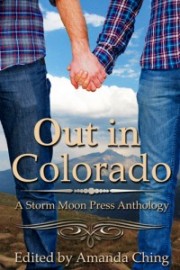 TITLE : Out In Colorado

This collection brings six talented authors from the Centennial State together under one title, all offering their take on what it means to be Out in Colorado. These stories explore the cultures and mores of the state as only native authors can, each bringing a unique perspective on the diverse peoples and changing attitudes that are quickly coming to define this state in transition.

“Something Old, Something Blue” by George Seaton

First, in Something Old, Something Blue, Justin Pauldino, the adopted son of Denver’s Italian mob boss, is a one night stand kind of guy and likes it that way, until his latest bed partner, Michael Blu, upsets his applecart world enough to make him consider settling down. When Justin decides to put his best foot forward with Michael—a third generation attorney, whose father and grandfather have an unpleasant history with Justin’s adoptive father—Justin’s world is turned upside down when his good intentions set in motion a series of events that will change his life forever.

Justin Pauldino is a young man living on a trust fund while working as a bar back in his Uncles bar, mostly as a way to pick up guys. One night he meets Michael Blu. They hit it off and although Justin usually doesn’t go for more than one nighters he is drawn to Michael and decides a second date is in order. The story is very much written with an Italian mob tone with Justin’s Uncle being called Fat Pauly. The way things are inferred about the businesses Pauly owns and his associates names lend to this idea but are never verified. What I had not expected was the paranormal aspect to the story and how the characters involved are all interconnected. I thought the Shining references were humorous.
The story felt a bit choppy. I felt like there was more story behind the subject of the story title, Something Old, Something Blue, that was missing and important to the story. I know it was a short story but the ending just felt too quick and unfinished. ~ Rated 3 Stars, by Deb

Joey Graham has demonstrated his Casual Brilliance and landed the job of his dreams out of school; the only catch is that he has to move to Colorado to do it. Fortunately, Joey’s got a new coworker who’s more than happy to introduce him to everything his new home has to offer.

In Casual Brilliance, Joey Lawrence has recently finished a degree in Materials Science and is preparing to leave for a new job at NIST in Boulder, Colorado. When he arrives, he’s shown around by computer programmer and senior technician, Jake Lawrence. Things are a lot more laid back and casual there than what Joey had been expecting, but as the weeks passed and he settled into his new job and got to know one workmate in particular, Joey found himself falling in love with his new life.

Both the MCs were very likeable and I really enjoyed getting to know them. At the beginning, I was a bit worried Joey was going to be too serious and straight-laced, but I was glad that Joey ended up having a playful sense of humour. Jake was all kinds of adorable! I liked that he kept giving Joey some of his clothing, like his scarf and his jacket, when Joey got cold, not being used to the Colorado weather. The similarity of the MCs’ names did get somewhat confusing at times. I had to keep stopping to remember which one was who, or wait for something that prompted my memory to come up. There were a few references to things that I had no idea what they were. I’m assuming they were cultural references, so if anyone wants to tell me who Captain Hammer is, or a Boilermaker and why you’d be buying ingredients for one in a pub, feel free! And I still don’t know what NIST is, or what Joey’s job position there was.

The story was cute and sweet. It ended quite abruptly, though. The beginning was a little bogged down in the scientific and lab descriptions and team dynamics which really had little bearing on the story. I liked the characters quite a lot, they were both rather endearing. Overall, the story, even taking into consideration it’s short length, felt a touch underdeveloped but very enjoyable nonetheless. The writing was good and I’d definitely check out a longer length story from this author. ~ Rated 3.5 Stars, by BookSmitten

Stuck in an abusive relationship with the cultured and sophisticated (and closeted) Ethan, a relationship that is quickly spiralling downward, Trevor feels Frozen, lost and left behind as everything spins on around him. When a sudden turn of violence forces Trevor to face the tragedy that his life has become and make a hard choice, it could be the awakening he needs, or it could be the last decision he ever makes.

Trevor first met Ethan shortly after a bad horse riding accident that left Trevor with months of rehabilitation. At first, Ethan (a married) was loving and supportive, helping Trevor financially and emotionally to get back on his feet. Because of that, Trevor has a sense of gratitude for all that Ethan did at the time, even though their relationship has since taken a darker turn over the years they’ve been together. As the truth of Ethan and Trevor’s relationship unfolds it’s revealed that, despite the apparent kindness he showed to Trevor at the start of their relationship, Ethan is an intimidating bully, moody and unpredictable. During the scene where Ethan’s choking Trevor, it’s inferred that this behaviour is not isolated and that it has escalated to a point where there’s a real threat to Trevor’s safety. So Trevor decides to make a run for it. He sneaks out of the condo that Ethan has set Trevor up in and just starts walking. He doesn’t really have any idea of where he’s going or what he’s going to do, but he knows if he doesn’t leave now, he’ll end up dead the next time Ethan loses his temper. Unfortunately, it’s winter in Aspen, Colorado and without the proper clothing, Trevor end up suffering from hypothermia. He wakes up in hospital to a lot of pain and gorgeous nurse, Seth.

Ethan is controlling, demanding and continually criticises everything Trevor does, often blaming him when things don’t go to Ethan’s liking. Trevor was judgemental and almost apathetic at times. He’s having an affair with a married man, yet he detests the wife for apparently being stupid because her husband is having an affair? I found both Ethan and Trevor to be pretty unlikeable. It wasn’t until he ended up in hospital that I started warming to Trevor. Does that make me horrible? That I liked him more when he was in such a bad way? Seth, the nurse, I freaking adored! He was patient, compassionate and sweet without being a pushover.

It took me quite a while to get into this story, and the use of present tense didn’t help with that, but by the end I was hoping that Trevor would find his way back to himself and, hopefully, eventually into Seth’s arms. I’d like to read more of these two. Although I’d really prefer it not be written in present tense. I found it too distancing, and when the main character is difficult to like at first, that distancing makes it very hard to connect with him. ~ Rated 3 Stars, by BookSmitten

Finally, being an otter shifter, though fun, comes with its own set of problems for Lon, not the least of which is the need to be in his shifted form for at least a few hours every week. This biological imperative threatens his budding romance with University of Colorado adjunct professor Corey when an accident in the back country leaves Lon unable to make his shift without revealing his furry secret.

This was a fun short story with a twist I was not expecting. It opens with Lon being dropped off by a friend to snowboard just outside Boulder. The descriptions of the snow and scenery are vivid and I will admit to being unfamiliar with the snowboarding terminology. This did not detract from the story. We get a sense of Lons love of being out in nature from descriptions during his day. When Lon finishes for the day he learns his friend has left him to find his own way home. He meets Corey, a fellow snowboarder who has just lost his board over the side of the railing at the parking area. Lon helps Corey retrieve his board and they ride back to Boulder together. The attraction is immediate and they continue seeing one another. From here we get hints that there is more to Lon than meets the eye. I would love to say more but I will not spoil it for you. As things progress, I knew where the story was heading but it was a fun romp and I enjoyed the way Corey and Lon interacted. It was a sweet, fun, romantic story with a satisfying ending. ~ Rated 4 Stars, by Deb

2 thoughts on “Out In Colorado”