With the daily countdown to the release of “Disasterology 101” reaching single figures we are thrilled to have Taylor V Donovan stop by at LYLBTB again!! Welcome, Taylor!! Not long now until the book comes out … How are you feeling? Excited? Nervous? Relieved?

All of the above *g*

I have to start off with just saying a huge thank you for another wonderful read. I loved the book! Both guys were just incredible.

Thank you for reading it! I’m rather fond of Cedric and Kevin myself. Their story is very special to me 🙂

You must be one of the bravest authors out there – not only in scale of projects (like 6 Degrees Series) but now in the weight of a subject. Why and how did Cedric come to you?

Yeah… I seem to have a penchant for complicated storylines. *sigh*

A while ago, and by “a while” I mean almost two years, I read a discussion thread in a yahoo group about the importance/necessity of sex in MM Romance and how children don’t belong in the genre. Some argued MM was pretty much synonymous with sexy times, and elements such as children, family, et al only distracted from the storyline. I shook my head so hard at those comments I think I hurt my neck. I thought about my gay friends and how their lives didn’t revolve around getting laid, and I wondered what would happen if a gay guy couldn’t have sex. Two hours later Cedric was born. He was so clear in my mind I didn’t have to “create” anything about him. I knew he was sick from the get go. I closed my eyes and saw the way he looked and moved. I heard the way he spoke, and felt the desperate way in which he wished to belong. Then I got busy finding him a guy 🙂  (btw I LOVE the model that you see as Cedric! I just HAD to add the photo below.)

What amazed me was how, although the subject is heavy, the book was never depressing. You managed to make it, well, not exactly uplifting, but positive – you know? Yet you stayed true to reality and didn’t wrap up a sugar coated solution. Was this a conscious decision?

Absolutely. That’s what life’s about, as far as I’m concerned. You identify problems, acknowledge issues, try to find solutions and deal as best as you can. Sometimes you’ll probably want to shoot yourself, but as long as you keep in mind there’s a light at the end of the tunnel, most days will be fine. 🙂 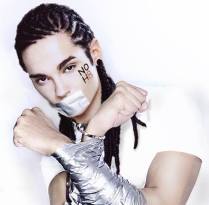 Following on from that, it seems like disabilities of different types seem to be quite the popular sub-genre in m/m books at the minute. What made you go with Cedric’s issues? (Not that I am suggesting you are chasing market trends.)

I started writing “Disasterology 101” in October, 2011. At the time disabilities were not “popular”, so to speak, but it took me so long to finish the story that it’d seem I *am* chasing a market trend. LOL

Seriously, though. We have stories with main characters suffering from a variety of physical disabilities, but mental illness hasn’t been explored as much. Some authors have “gone there” and created beautiful characters (“Ethan Who Loved Carter” by Ryan Loveless comes to mind) who aren’t the normal type, but for the most part it is secondary characters that are affected by mental illness, and our heroes get to deal with the consequences of said conditions and show how awesome and caring they are.

In “Disasterology 101” we see Cedric deal with the symptoms and effects of his obsessive compulsive disorder. We see him struggle, cope, and try to have a normal life, and we follow Kevin as he learns about OCD and make adjustments that will allow him to be close to a man that, albeit complicated and oftentimes untouchable, has earned his respect and love.

Was it a difficult job doing the research?

Not difficult, but extremely time-consuming. I needed to fully understand Cedric’s particular brand of OCD, his treatment and the side effects before I could even write the Prologue, and I was still learning by the time I wrote The End. I never knew there were so many before I started working on this book.

I have a thing for Brit boys myself, so loved that Cedric was from the UK. Was it hard writing a Brit? I am guessing you had an English beta on board?

I was nervous about it him not sounding like the real deal, so I had a few conversations with several Brit friends about slang, foods, lifestyles and even names. One particular Brit reader hated Cedric’s name 😛

Now we need to lighten the mood a bit – let’s talk cleaning….. Which is your worst job around the house? Cleaning the shower? Or cleaning the oven?

The shower. Ugh! Good thing the kiddos took that over! LOL
~ a friend of mine actually wipes out her oven every time she uses it. Every. Single. Time.

Is there anything that you feel you are remotely OCD about?

Oh boy. A clean house, matching shoes and purse… I could give you a list, but for the sake of brevity I’ll just mention something related to writing books: research. I have to have accuracy, good characterization and realism in my stories. If something doesn’t feel like it could happen to any random person walking down the street, I’m not satisfied with it.

Then again, realism is relative, isn’t it?

Finally a little game…. 2 lies and 1 truth. Can you tell us 3 facts about yourself? As outlandish as you like 🙂  Just make 2 of them up and be truthful about one. Then the commenters need to guess which is the TRUE fact that you share. Are you game?

1. I rode a horse once. My weight broke his back.

2. I’m nervous of speaking in public ’cause I think no one will understand my accent.

3. I was the star of my high school softball team.

Finally, finally…. You surely don’t think you could get away with no question re “Six Degrees of Separation”. Do we have a date? Kinda? Sorta?

Kevin Morrison had it all. A house he worked hard for, a loving wife, and three beautiful children. But it wasn’t until his marriage ended that he realized what the void he’d felt almost all his life meant. Coming out as a gay man at thirty-six is not an easy feat, but he is determined to be true to his heart. Meeting a man who shares his values, and is good with his children would be a bonus, but when the guy arrives in a uniquely wrapped package, and has very specific handling instructions, Kevin needs to decide if he’s up for that kind of love.

Obsessed with order and symmetry, and a paralyzing fear of germs, Cedric Haughton-Disley has lived with isolation and loneliness as long as he can remember. Desperate to be normal, he makes some much-needed changes in his life. If he can commit to his treatment, he might very well be able to procure some quality of life… even if that’s all he can get, as finding love and having a relationship are only possible in Cedric’s wildest dreams. But when a chance encounter leaves Cedric wishing for more, he decides to take a leap of faith, and pursue the guy he wants.

Together the two men make an unlikely match. Cedric needs organization, and Kevin represents chaos. In order to stay together they both need to compromise, but will they be able to deal with Cedric’s issues and the potential disaster, or let it break them apart?

Taylor V. Donovan is a compulsive reader and author of m/m romantic suspense. She is optimistically cynical about the world; lover of history, museums and all things 80s. She is crazy about fashion, passionate about civil rights and equality for all and shamelessly indulges in mind-numbing reality television.

When she is not making a living in the busiest city in the world or telling the stories of gorgeous men hot for one another, Taylor can be found raising her two daughters and her fur baby in the mountains she calls home.

Thanks so much for stopping by Taylor, hope the new release is a massive success. I certainly think it was a wonderful read. To everyone reading this – be sure to comment, and play the TVD 101 Game, one lucky poster will win a copy of the e-book! Good luck !!

Thank you for having me again, and to everyone for stopping by 🙂