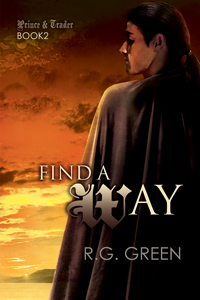 Prince and Trader: Book II
Sequel to And So It Begins

Passion has blossomed from the lifelong friendship between Kherin Rylle, the second prince of Llarien, and Derek Resh, a trader employed by the crown. But left on his own in the border city of Gravlorn, Kherin soon draws the anger of the Defenders and his own brother as charges of cowardice and treason are thrown at his feet. Meanwhile, the increasingly dangerous attacks of the northerners bring more than the threat of war to Llarien’s border. Rumors of an ancient northern magic promise a danger far greater than war, and Kherin can’t say the rumors aren’t true.

Only now he has to learn the truth on his own.

Derek left Gravlorn in search of answers for the unexpected happenings at the border, and although Kherin is determined to keep what they found together, growing tensions, hidden jealousies, and unforeseen revelations about the northern lands threaten to take away everything he has worked to gain. As the border grows more dangerous, Kherin faces the reality that courage and honor may not be enough to end the northern threat, and love may not be enough for Derek and Kherin to find happiness.

This is the second book in a captivating series, with And So It Begins being the first. Reading the series in order is definitely a must for one to fully understand what is going on, and to get the full benefit of the beautiful character development and exciting story arc.

Oh yeah, this sequel was everything I wanted it to be. 🙂 It picks up precisely at the end of the previous book and provides fulfilling detail of what happens to our new lovers, Prince Kherin of Llarien, and the Trader, Derek. The two are in separate cities – we find Kherin remaining in the border city of Gravlorn serving duty as a Kingdom Defender, and Derek in Dennor seeking the scholar, Dar. Both are working at uncovering the secrets of the mysterious and dangerous Akhael and finding evidence as to whether or not invaders from the North have infiltrated Llarien.  Derek also ends up uncovering the location of Tristan, Kherin’s highly vindictive ex-lover.  He unknowingly leads Tristan back to Kherin, where Tristan attempts to launch his revenge.

Although there was plenty of it to be had, this book didn’t really revolve around fast paced action, but rather focused on how Derek and Kherin uncovered answers to what they needed to know – both strategically and personally. I absolutely loved feeling as though I was present every step of the way with how they both uncovered clues and plots, weaving together information they needed to mount the best defense for the Kingdom – and themselves. It was particularly gratifying to behold how the two men combined their findings to bring about the solving of the mystery of the Akhael – Kherin actually had things figured out before Derek returned to Gravlorn with Dar to fill in the blanks.  The action scenes that were present were vivid and entirely crucial to the story, and the evolution of the characters. Speaking of which – I loved the great character growth shown by Kherin in how he dealt with the situations he was confronted with, and in how he accepted and acknowledged his faults. As his older brother, Prince Adrien, recovers his health and resumes a position of leadership, the reader witnesses a very real portrayal of Kherin maturing and coming to terms with his place in the Kingdom hierarchy.  At the same time, Adrien is pleasantly surprised and pleased with the maturity that Kherin displays. The two brothers maintain a wonderfully supportive relationship.

I enjoyed getting POVs from both Derek and Kherin. Derek is such an easy character to love. He’s patient, kind, wise, smart, and worldly. All that and sex on a stick! Lucky, lucky Kherin. The pair work, and love, so well together. I found the relationship between Kherin and Derek to be strikingly romantic. And their sexy times? Intense.  The sex was made even hotter by their obvious love and affection for each other.  ♥ I personally relate to the obsession that Kherin has with Derek’s hair.  😉

The author had me on the edge of my chair and guessing about the ending – I love that! Nothing was a given. How were the Akhael going to be driven back? Were the Northerners complicit or pawns? How was the King going to react to Kherin’s actions at the border and the fact that Kherin and Derek had become lovers? What would become of those that had betrayed Kherin and harbored great malice toward him? As it turns out, there are no real loose ends with the immediate plot points, yet somehow I’m thinking that we haven’t seen or heard the last from the Akhael, or those individuals that seek revenge on Kherin and Derek.

One key element I am very curious about is the overall views on homosexuality in the Kingdom of Llarien. It seemed basically accepted, yet many people still gossiped and snickered behind Kherin’s back – but not Derek’s. Did they have more general respect for Derek? Was the gossip merely because Kherin was royalty? More mention of other same gender couples would be welcome for gaining a better feel of how widely acceptable this was, or if it was merely tolerated.

Author RG Green has been so kind as to confirm with me that she considers the first two books in this series to be prequels of a sort to what will be many further adventures for the pair. 😀 This reader is primed and ready for the promised travels yet to be undertaken by Kherin and Derek. I say bring them on!

So many elements that I enjoy are brought together in this book – beautiful writing, great characterization, an enchanting and unique story line, solid character development and.. most of the conflict was external to the romance. Thank you RG Green! I highly recommend this series, especially for fans who enjoy historical flavored AU stories combined with a compelling romance that is both provocative and passionate.  🙂