Prince of Silk and Thorns 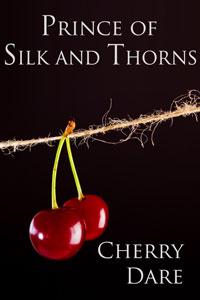 Title : Prince of Silk and Thorns

Prince Alar is notorious… and tormented.

The prince’s decadence is as famous as his extraordinary beauty. Rumor holds that he murdered his own brother to get one step closer to the throne. Some believe him to be the son of a fallen angel. But beneath his icy exterior, the prince burns with secret guilt… and untapped passion.

Garin is shocked when Prince Alar rides into his village and demands that the young men strip for his inspection… so he can select one as his new slave! To protect his brother, Garin volunteers, leaving his peaceful village– and his innocence– behind. But even naked and chained, he is no helpless victim.

At the palace, Garin discovers a new world of decadent sex, dangerous intrigue, and devastating passion. But from the moment the arrogant prince puts a collar around Garin’s throat and claims him as his own, the men are bound together in more ways than one.

A novel of the passion that consumes, the love that sustains, and the ties that bind.

One of them lost his innocence early and has had the weight of the world on his shoulders. The other had to grow up early as well from his boyhood, yet retained his innocence and naiveté.

The first wears a mask of cruelty to hide his pain and guilt. The second bares all his emotions on his face, recklessly defying wrongs.

One is a Prince, Heir to the Crown, the other a mere peasant with a lost freedom to be enslaved on a whim.

This story begins in a strong and a sensational way. Prince Alar, rumored to be cruel beyond belief, arrives in a small village and demands a slave. The ignorant boys and men do not resist even as they do not understand how such thing can happen. All succumb to the Prince’s whim, but one. Garin is a man who has never left his village, has never known anything else. The fact that his brother might be hurt or taken away from him spurs him to be reckless, defy the Royal Herald and almost talk back to the Prince himself. For his foolishness he’s made a slave. For his reckless ways he’s humiliated and wronged, yet he cannot come to regret his decision, for if not for that, he’d never be able to get so close to the Price, who looks like a Fallen Angel.

It is a weird relationship that bounds Prince and slave in this book. All the humiliation that Garin suffers in the hands of the Prince and his Court are somehow erased in the minute little things the Prince does for him in the privacy of their rooms. While his master seems cruel and talks to and for him in the most uncaring way, behind closed doors there is the subtle slip of a caring soul. And while Garin is still reeling from the abrupt change in his life, the intrigues and plots never cease in the Court, with Garin finding himself unknowingly right in the middle of it all. Played like a pawn in a chess game he is forced to think fast and grow from a farm boy to a man determined to serve and protect a master uprooted him from his safety.

I must say that there were parts that I didn’t quite liked, or rather left me a bit cold. After the assassination attempt to Prince Alar came his capture and that was followed by a forced public humiliation scene that made no sense to me. Other than it was a vessel for the changing roles between Alar and Garin I did not see the meaning of that scene, the logic behind it. There were other parts as well that could easily been erased and leave the storyline in better order, with the purpose of the story flowing smother than the hitches that those little unreasonable scenes caused. There were also some typographic errors that seemed glaring and disturbing to me, making me recoil from the haze of the story and think that the book needed a bit more polishing before it was published, and that did not bode well for my concentration. I hate it when it’s ripped from the story in such a crude way.

Nevertheless, when I step aside from my little fits and look at the grand picture I must admit, and gladly so, that this was a fascinating book for me. I loved all its cruelty and brutal scenes. I loved the hot sexual ones too, a bit too much sometimes. A bit of warning to you who attempt to dive through these pages, there are some heavy passages here, some brutal punishing scenes, forced intercourse and even one mf scene, that while not so graphic it’s still there. There is also one scene that contains more than two people and might offend some readers’ sensitivities. But if you have the stomach for some dark fantasy (well not THAT dark) and some lovely intrigue and some perversely hot sex, this is a challenging enough book for you.

I dare you to read it! One thing is certain if you do; you’ll either looove it or completely hate it. 😉