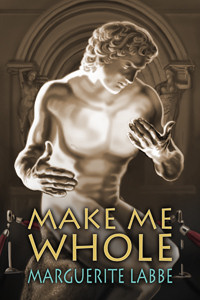 After a grueling battle in ancient Greece, lovers Dexios and Lykon committed their lives to each other in the name of Goddess Cythera. After the war, fearing the strength of his love for Dexios, Lykon abandoned his vow and returned home. Heartbroken, Dexios called on Cythera, who changed him into four unfinished statues. In that form he would wait for his fickle lover to return, break the curse, and make him whole.

Thousands of years have passed when Galen Kanellis finds the disassembled pieces in the storeroom of a Seattle museum and makes them the focus of his new exhibit. Needing information, he contacts his ex-lover Nick Charisteas. Nick has a lifelong dream of finding the Dexios Collection, and the last thing he expected was for it to wind up in the hands of the man who broke his heart. As both men search for answers about the statues, worries of abandonment and fear of loss test their renewed relationship, threatening to separate them again—this time permanently.

Galen Kanellis is the owner of a museum in Seattle. The museums theme is Gay love, sex and life. He is in the process of opening a new exhibit room with the theme of homoerotic interpretations on the ancient world. One morning he comes in to the museum to find four very old, large crates in the store-room. There is no indication of where these crates came from or who sent them. No one remembers them being delivered. Once they are uncrated, Galen discovers four life-size statues of the same man dressed like a warrior from ancient Greece in various poses of intimacy. Upon inspection Galen realizes these statues are incomplete, that the man is missing his other half in the poses. Galen is drawn to these in a way he does not completely understand and vows to keep the collection for his new exhibit. One of Galen’s first thoughts when he sees the statues is how much Nick Charisteas , his ex-lover, would love them. Even though Galen ended the relationship, he has counted the month and days since they parted and thinks of Nick often. Galen decides to call Nick and tell him about the statues and see if they might have a chance to start over.

Galen has a lot of baggage from a previous relationship that ended tragically. He is afraid of letting himself love again. This had led Galen to a series of hookups, including some threesomes that had included Nick. During those hookups both Galen and Nick discovered that they felt something more for one another and had progressed into a relationship, until Nick wanted more than Galen was willing or able to give. Nick has his own issues with abandonment and is estranged from his family. His need for commitment and his possessiveness were part of what drove Galen away. They have not spoken in six months.

Nick thinks this may be the Dexios collection he has been searching for and decides to risk seeing Galen again to have a chance to see the statues. His family has a long personal history with these statues, one his is not willing to share completely with Galen, even though he had mentioned them to Galen when they were seeing one another before. He vows to not let himself feel anything for Galen and risk having his heart broken or being abandoned again.

What Nick does tell Galen is the legend states that Dexios and his lover Lykon had made a vow to one another in the name of the Goddess Cythera, but Lykon broke his vow out of fear of his feelings for Dexios and asked Dexios to be patient with him and give him time to think. Dexios left, hurt and angry, and travelled to the island that he and Lykon were to live together. While grieving on the beach, Cythera approaches him and, in that double-edged sword way that gods and goddesses seem to work, she turned Dexios into four statues so that he may await his lover’s return. To be together, Lykon must fulfill four vows before they can be reunited and the statues made whole, but there is a caveat that makes this challenge seem almost unattainable.

Upon seeing one another again, Galen and Nick realize that they still have feelings for one another. Galen promises to start things over and show Nick there is more to them than just sex and that he is not going to run away this time. When Nick agrees to try again, something unusual happens to the statues.

“Make Me Whole” caught me by surprise. I read the description and I thought it would be interesting, a modern tale with a bit of mystery revolving around ancient Greek statues. What I was not expecting is how the lives of both men are so intertwined with the legend surrounding the statues. The story is written in both the present and the past with the characters from both time periods weaving their stories together. It is a contemporary romance with elements of a Greek tragedy. There were times I was frustrated with both characters because it seemed like they were not learning from their past mistakes and rehashing their issues was stifling the story, but the entire time I kept encouraging them to not give up. There is passion between Galen and Nick, but also heartbreaking issues of trust that keep tearing them apart. Those moments when they do open up to one another and the trust was able to take root, were beautiful. There are some passionate moments that I felt were realistic in showing that trust. I thought the story was well written and I was intrigued with the way the author combined modern romance and ancient legend. This is the second book I have read by this author and I enjoyed both of them very much.