How I Met Your Father 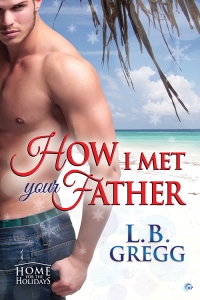 Title : How I Met Your Father

Collection : Home For The Holidays

The man of your dreams could be sitting right next to you.

Former boy band member Justin Hayes isn’t looking for a man. He just wants a quiet, scandal-free Christmas at home in Chicago, out of the public eye. But his best friend and bandmate is subjecting everyone to his destination wedding, and Justin can’t dodge the “best man” bullet. All he has to do is get to the island on time, survive the reunion, and get Chuck to the altar with as little drama as possible. What could possibly go wrong?

Jack Basinger’s own plans for a quiet Christmas have been dashed by the summons to his daughter’s hasty wedding with a man Jack has hardly met. On the bumpy flight to the island, he finds himself comforting a nervous—and extremely attractive—young man. One hasty sexual encounter in an airport bathroom later, they both feel much better. No one ever has to know, after all.

Now Justin and Jack must find a way to explore their attraction, despite the distractions of disapproving family members, unexpected announcements, an impromptu concert, and an island paradise that proves there’s no place like home.

This title is part of the Home For The Holidays collection.

Yay! We get an LB Gregg Christmas story. This one has everything we’ve come to love about her books. Lots of laughs, HOT sex scenes and lovable characters. The secondary characters were fun but the MCs stole the show. So sexy and absolutely meant for each other. There is an age difference between Jack and Justin but it’s not a huge one. I think it actually added to their unsuspecting attraction. Resisting the attraction seemed to amp up the tension created between the characters. I liked how in command Jack was and demanded Justin face the attraction. It was very sexy. It was fun to see the events happen from Jack’s POV. His banter with his friends and ex-band mates was great. I got know a lot about their relationship through it.

Still a really good read. My first Christmas story of the season and I enjoyed it. I’m a huge fan of this author and will read anything she puts out. It’s a funny and quick holiday read with great characters. I recommend!