Scent of a Wolf 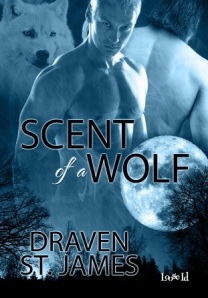 Title : Scent of a Wolf

Jace Shaw is one of the few survivors of an extraordinary, rare wolf pack. He spends his days on the run and his nights in another world with a man he’s only dreamed about. To sleep is to feel his dream man’s hands on his body and hear his wicked whispered words. But when the sun rises reality crashes in: the evil that destroyed his birth pack hunts his kind down in search of a way to control their power.

Merek Wahya is an alpha dealing with all the issues of being newly appointed, but they all fall away when he closes his eyes at night. Then, a man with moonlit hair and mercury eyes crawls into bed with him. When he wakes it’s to a painful arousal no one can satisfy. When Merek’s wolf catches Jace’s scent he knows he’s found his mate, and he soon learns their nocturnal meetings were only foreplay. The joy of this discovery is shadowed by the trouble that follows Jace. Merek’s mate is embroiled in a battle between two ancient packs, a war Merek must now fight. If he fails he could lose Jace forever.

Jace Shaw and Merek Wahya dream of each other every night. They’ve been doing so for most of their lives. The dreams are intimate and sexual. Both men wake up lonely and frustrated, unable to find any satisfaction with a flesh and blood partner. In fact, they actually feel as though they’re being unfaithful or are simply unable to perform with anyone else. Due to being a member of a rare species of werewolf, Jace is able to communicate telepathically with family members. He’s been unable to do so with his grandmother, Emma. He travels to visit her. When Merek finds a wounded young wolf he takes the man, Cory, to his pack healer, Emma. Jace scents Merek near Emma’s house. He recognizes his scent from his dreams and is also able to tell Merek is his mate. Unfortunately, the men he’s spent most of his life running from are also there. Jace is stuck. He has to choose between exposing himself to the vulnerability of finding his mate, or saving his grandmother’s life. He chooses finding his mate. Merek scents Jace on the air and runs to find him wounded and battling a feral wolf. After killing the wolf, he takes the wounded Jace to Emma’s. There he learns about childhood stories and legends that are actually true and some of the true nature of his mate.

When Jace wakes up the next morning he is at his grandmother’s house. Merek is sleeping in the chair near him. Jace notices the scent of a different wolf and searches him out. Jace can clearly see the young man is a hybrid of his own pack and of a normal wolf. It is something that simply shouldn’t be possible. The young man, Cory, wakens and tells Jace the story of his life. It’s quite awful. Cory has found himself at the mercy of the same man that savaged Jace’s life, Erikson. Jace also realizes he and Merek have some of their own problems to solve. Merek’s pack isn’t stable. There are factions who don’t want Merek as alpha. Jace is convinced having a gay male mate will make it that much harder for him. In addition to that, Jace doesn’t want to complete the mate bond with Merek until he knows it will be safe to do so. Their life forces will become intertwined. Death for one means death for both. In very short order Merek and Jace need to secure the stability of Merek as alpha, rescue Cory’s family, and rid themselves of the danger posed by Erikson. What they didn’t expect was all their problems merging and confronting them at once.

I have a particular fondness for shifter stories. I’ve read a lot of them. This one follows the classic m/m shifter storyline. I feel it borders on cliché. Merek and Jace are fated mates and simply can’t resist each other. Werewolves are invariably bigots who won’t accept a homosexual alpha. Jace tries to sacrifice the relationship for Merek’s sake yet hurts Merek’s feelings in the process. The baddie is pure evil and doing some kind of creepy pseudo-scientific experiment. I’m sorry, but I’ve read this before. Repeatedly. Don’t misunderstand, I’m not saying I didn’t enjoy the book nor am I saying it was badly written. I absolutely feel this was a well written and enjoyable example of a series of overwritten tropes.

Despite my complaints this book is unoriginal, it does have some interesting original world building. Jace is a rare and magical breed of werewolf. I’m fascinated with different ways authors flirt with the mythology surrounding werewolves and the moon. This book certainly had an innovative take on it with eyes that look like mercury and warm to the touch magical hair. I also like the set up of future books. Again, despite my complaints, I will totally read this series.