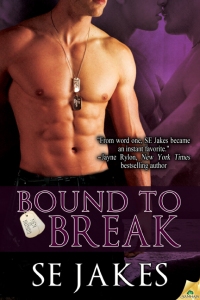 Four men fighting against their pasts…and for each other.

Several years after washing up on a beach in South Africa with absolutely no memory—not even his name—Lucky would rather not remember his past. Based on the number of scars on his body, it couldn’t have been anything good.

Then a man claiming to be his former Navy SEAL teammate walks into the bar and insists that Lucky’s real name is Josiah Joshua Kent. Turns out he’s been listed as KIA, and since he’s not dead, he’s now considered a deserter.

Discovering Josh is alive throws Rex, and his relationship with Sawyer, into a tailspin. Rex can finally lay to rest the nightmares of the night he couldn’t save his teammate. And Sawyer is faced with his worst nightmare—a relationship threatened by a very real ghost from the past.

As Josh begins to piece his memories back together, another man with a shadowy connection to his past—and maybe his heart—holds the key that could free him. Or send him to a traitor’s fate.

Product Warnings : Contains rough language, rougher sex and warriors who fall hard for one another.

I’m a bit flummoxed on how to write this review as it’s two separate yet intertwined stories. Lucky and Dash are a couple as are Rex and Sawyer. The complications arise when you factor in the relationship between Lucky and Rex. Lucky is actually Rex’s formerly deceased (yes, I wrote that right) boyfriend and SEAL teammate, Josh. To fully understand the nuances of the story it is important to read “Bound by Danger” that details the beginnings of Rex and Sawyer’s relationship. We also finally learn the complicated details of the goings on that started the mission in which Rex was tortured and Josh “died.” Biologically, Josh is Lucky. They are the same human, but Josh suffered a traumatic brain injury that left him with amnesia. I’m not usually a fan of amnesia storylines, but I keep finding books that have me at least rethinking that. Lucky washed up on a beach in South Africa and has been tending bar in the establishment owned by the people who found him. He has no recollections at all of anything that occurred prior to his arrival on that beach. None. He had to watch old news to learn about modern history. When a man walks into the bar and insists he knows who Lucky is and his name is really Josh it all turns to crap. Lucky is terrified. He doesn’t want to be found. Whereas he’s curious about his life he knows it had to be horrible as he’s covered in some seriously nasty scars. When his boss’ son comes home for a visit it works as a convenient rescue from the man insisting he knows about Lucky. And the son, Dash, is all kinds of gorgeous who happens to be the real occupant of the apartment Lucky has been living in. Lucky has spent years looking at the professional photographs taken by Dash and becoming more and more fascinated with the man through his images. Of course they’ll happen to fall into bed together for a night that changes everything for Dash.

Rex and Sawyer are finally together and off duty when Rex gets the news that Josh is alive and has been found. Sawyer is crushed but happy for Rex. Immediately, Sawyer starts pulling out of the relationship. He can’t see it as anything but doomed and the fact Rex is dreaming about Josh just cements that he’s just biding his time til Rex breaks it off and gets back together with Josh. The Navy wants Rex to go get Josh and bring him back home. What Rex finds is Josh but not. It’s Josh’s body complete with his mannerisms and reactions but none of the knowledge that would make him Josh. Even seeing images of himself with his old team or proof of his relationship with Rex does nothing to prove to Lucky that he’s Josh. He’s simply not that man anymore, and he’s in the process of having the only family and home he can remember being ripped away from him because of Josh. Dash didn’t expect to care so deeply about Lucky. It was supposed to be a one night stand designed to make his target relaxed and allow secrets to slip. Dash, a CIA agent, had been searching for years for the threat to his family only to come home and find it living in his old apartment. A gorgeous and strangely vulnerable threat with no apparent knowledge of his own possible lethality. Lucky is whisked away to the United States and locked down at a military facility for testing. Yes, he really does have brain injury and no knowledge at all of his previous life. It’s decided he wasn’t a deserter and he’s given a discharge from the Navy and lots and lots of psychotherapy. Lucky is completely unaware Dash is there watching him. It’s not until he’s released from the base that he sees him again.

Rex sees Sawyer slowly drifting away from him on autopilot. He does his best to force a reaction from Sawyer and get them back on track. The reappearance of Josh/Lucky has exposed many of the faults in their relationship without actually being a threat itself. Rex and Sawyer don’t really know each other and have to work together to form a true partnership as opposed to simply being a couple of guys who both work together and sleep together. Dash and Lucky have other problems. They are simultaneously more difficult yet a bit easier to handle. Dash was one of two CIA agents that had been kidnapped. Rex and Josh’s SEAL team was captured while attempting to rescue Dash, who had escaped. Dash feel responsible for Lucky’s predicament. The situation finally comes to a head when someone very close to Lucky decides to exact some revenge on the SEAL team.

I’ve wanted Rex and Sawyer’s book for a long time. The return of Josh so needed to happen to make them a stable and long term couple. I liked that despite still physically being alive Josh was gone. It was a great device to show you can’t go back in time and we’re not the same people we were years ago. What I didn’t get, that I really wanted, was Rex showing Sawyer how much he wanted and needed to stay in a relationship with him. At no point did Rex lose his shit and get really scared Sawyer may leave him. Sawyer was told Rex loved him and wanted him but never shown. Yes, Rex did force Sawyer to pay attention to him in a rather cruel way when he was drifting away. For me that read as Rex having to deal with Sawyer’s problem not listening, not Rex’s fears of losing the man he professes to love. I’ve tried to talk myself into the fact that it really did work and it made sense but no. For me, it would have been so much better if Rex had to prove his own need for the relationship to Sawyer.

Okay, I should talk about Dash and Lucky as they were half of the book. Unfortunately, I didn’t really care about them nearly as much as I did Rex and Sawyer. That is my fault. Sorry. I did like the use of the falling in love with your enemy trope. I also really liked Lucky’s fears he was a real enemy to Dash. Lucky was at the top of the list of people afraid of what he was capable of. He was terrified he had been programmed to kill someone he had grown to love. I also liked that Lucky wasn’t worried about what he had lost in the same way Dash was. Lucky cared about his past only as it pertained to the future. He wasn’t interested in his past with Rex and rekindling it. He was more interested in how you live a life with only 4 years of knowledge. What do you base your decisions on? Both couples had to forge through some hard times and tough decisions to make it. This is certainly a must read for any fan of SE Jakes Men of Honor series.

S.E. Jakes has kindly offered up an e-book copy of “Ties That Bind”, her Men of Honor Christmas story, to our Secret Santa Stash – so just make a comment, any comment, and you are in the draw! All prize winners will be announced on December 20th. Good Luck! 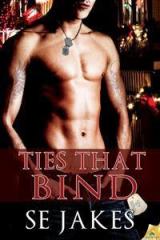 Can two men let go of the past in order to find their future together?

When helo pilot Glen Rhodes flies Navy SEALs into the most dangerous places on earth, he has nerves of steel. Since his trusted Dom’s death three years ago, though, the thought of submitting makes him panic.

Determined to move on and long past ready to release the adrenaline rush from his job, Glen returns to home ground—and to the bar he hasn’t had the heart to enter for three long years. There, he meets a man who seems to fit naturally into the void.

Derek Mann has suffered his own losses, and he isn’t looking for permanent. Easy conquests don’t interest him, either. One look at Glen’s proud military bearing and sad eyes tells him that he has a challenge on his hands. And that winning Glen’s trust will unleash something wild and beautiful.

The plan is to tread lightly. But from the first touch of skin on skin, there’s no holding back…except when it comes to their deepest emotions. A Christmas Eve crisis pushes them both to their limits, leaving them no choice but to let go of the past…or let it pull them apart.

Warning: Contains rough language, rougher sex and warriors who fall hard for each other.

SE Jakes writes m/m romance. She believes in happy endings and fighting for what you want. You can contact her the following ways:

Truth be told, the best way to contact her is by email or in blog comments. She spends most of her time writing but she loves to hear from readers.