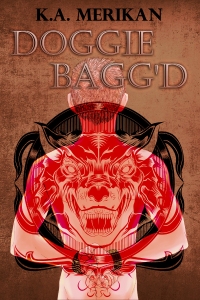 Since Kyle was a teenager, he had a dirty fantasy about being ravished by a beast. This year, Kyle is taking the plunge and letting his new boyfriend, Dan, meet his parents for Christmas. It might be time to share one of his most secret fantasies with Dan and see if he doesn’t freak out. They’ve been going out for a few months and explored their sexuality together, but Kyle knows this particular fantasy is a bit different.

Will Dan turn out to be a stud dog or a puppy?

‘Doggie Bagg’d’ is a standalone story in the XXX’d series, but can be read as #3

Sheesh! The places this writing duo takes me to! I, personally, would not classify this as a Christmas story as such – there are no kisses stolen under the mistletoe or sweetly tendered presents and a pretty, twinkling Christmas tree. What it is though – is another step in the story of Kyle and Dan – and they happen to be going home to Kyles’s for Christmas. So yes, in that sense it is a Christmas story 🙂 but in all honesty the Christmas part has no bearing on the actual story.

I absolutely adore these two guys!! Dan especially, but the two of them together are just wonderful. Kyle is the King of Kink! And Dan gives his little kinkster everything he wants, needs and asks for. Everything. I can’t really add much to this review – the blurb pretty well covers everything that happens – but I would say the writers have done a great job with what could be a very tricky storyline. Whilst puppy play is not something I seek to read, the way it has been written was kinda sexy. I liked it. Rainbow Bash’d is still my fave in this set of books – but this is a good addition, and I look forward to more!

This book is stated as being a standalone but I would honestly recommend that you read the three books in order – it really adds to the evolving story of the guys’ relationship, and how it is deepening. Have I mentioned how much I love Dan? Probably. 🙂 But some things are worth repeating! 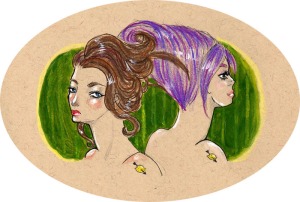 K.A. Merikan is a joint project of Kat and Agnes Merikan who jokingly claim to share one mind. They finish each other’s sentences and simultaneously come up with the same ideas.

In 2006 a mutual friend invited them over to a party and after a whole night of chatting and watching movies, the idea of writing a novel together came

up. It marked the beginning of both a professional collaboration and lasting friendship of Kat and Agnes.

The beginning was a serialized on-line novel (in Polish), but after that more and more ideas kept coming and in a few years of writing, the project was taken to a new level – to writing in English and self-publishing.

Kat and Agnes enjoy writing various kinds of stories, from light-hearted romance to thrillers. They love creating characters that are not easy to classify as good or evil, and firmly believe that even some villains deserve their happy endings.

Kat Merikan is a freelance illustrator and fashion enthusiast whose favorite things include chili chips, stiletto shoes and cats.

Agnes Merikan aspires to become a sexologist. She loves chocolate, dogs and all things kitsch.

It is easiest to find them in galleries, good restaurants and historical sites, always with a computer or notebook, because for Kat and Agnes, every day is writing day. Future plans include lots of travel and a villa on the coast of Italy or a flat in Paris where they could retire after yet another crazy venture, only to write more hot m/m romance.

K.A. Merikan firmly believes that nothing brightens up the day like an energizing cocktail of handsome men, love, sex and some great story, all topped with a lot of sweet and sour.

We have always valued the feedback we receive from our readers, so if you have any suggestions, comments or questions, do not hesitate to contact us 🙂

You can find K.A. Merikan at

A word from the authors …

Doggie Bagg’d isn’t a Christmas story per se, but it does happen over the holidays and plays on the idea of getting a puppy for Christmas. Dan though is no puppy. He doesn’t even have one of those big red bows around his neck.

but can also be a time for sharing secrets. That is exactly what Kyle does when he shares his dirty role-play fantasy with his boyfriend. As un-Christmassy as the fantasy is, it brings them even closer together. It takes guts to bare your soul to your partner. And on the other hand, what better way is there to relieve some tension before meeting your boyfriend’s parents, than having a hot and dirty encounter with him while they’re out at a dog show?

K.A. Merikan have kindly added the complete set of XXX’d books to our Holiday Giveaway! Comment here to be in the running – all you need to do is tell us about clowns …. and/or puppies 🙂 As per usual all winners will be announced on December 30th. Good Luck!