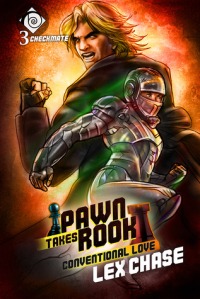 Even after eleven months of keeping the mean streets of Axis City safe, superduo Checkmate—Hogarth Dawson—and his boyfriend, Memphis Rook, still receive the cold shoulder from the Power Alliance. Undeterred, Hogarth brings his intense focus to bear on Rook, and after Hogarth makes an accidental marriage proposal, it becomes all too clear Rook isn’t quite at the same place. But before life gets awkward, duty calls.

Booted-off female contestants of the romantic reality show Single and Super are being found in comas, and Checkmate needs to get to the bottom of it. As part of Rook’s plan, he cleans up his bad boy image and goes undercover as a bachelor looking for love among twenty-five frenzied women. Against Rook’s wishes, Hogarth sneaks onto the set as a cameraman to investigate the case on his own. With questions unanswered between them, emotions run high, distracting them and feeding a trap of their own making.

This was the last installment of the Checkmate series. While it’s sad to see it go I was happy with how it was all tied up. The series is told from a very unique and specific voice of one of the MCs named Garth. He’s a superhero wanna be. He does have powers but doesn’t always use them or fully understand them. Garth definitely has a better understanding of them after this book. What better way to force your hand than when the love of your life is in trouble?

I thought the idea of the superhero’s story set at a Con was fun. I loved Rook in this one. Kind of grumpy in that sweet and endearing way. He certainly seemed to show his affection for Garth. This one was extra smutty and I liked it! The scene in the stairwell was indeed naughty and it was nice to see Garth enjoying himself in that way. I mean, if you’re dating a bad ass superhero then take advantage of the perks!

I have to say I was a little disappointed in Garth in Conventional Love. Why in the world would he believe anything that comes out of Chivalry’s mouth? He should never have doubted Rook. Even after he tried to kill him. Yeah. Some things happen. 😦 I thought the “friends” added some good humor to the story. There was plenty of action with Rook kicking ass and Garth did his fair share, too. It was nice to see him save the day. Overall a good end to the series. Again, I need to express how much I love these covers!

← When Love Gets Hairy
Love On Site →