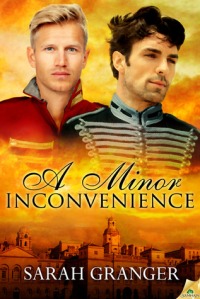 Duty, honor, propriety…all fall in the face of love.

Captain Hugh Fanshawe returned from the Peninsular War with a leg that no longer works properly, thanks to a French musket ball. Now his fight against Napoleon is reduced to quiet, lonely days compiling paperwork at Horse Guards headquarters.

His evenings are spent dutifully escorting his mother and sister to stifling social engagements, where his lameness renders him an object of pity and distaste. But his orderly, restricted life is thrown into sudden disarray with the arrival of Colonel Theo Lindsay.

Theo is everything Hugh is not—a man of physical perfection and easy yet distinguished address. Surprisingly to Hugh, Theo appears to be interested in making his acquaintance. Lindsay turns out to be a most convivial companion, and Hugh finds great pleasure in his company. Their friendship deepens when they become lovers.

In spite of himself, Hugh falls desperately in love. But when a French spy is suspected at Horse Guards, Hugh discovers nothing is as it seems…and the paper he shuffles from day to day could be the instrument of his lover’s death.

Thank you Barb, for pitching this lovely historical my way a few months back 😉

Well yes, there you go. I do love a good historical and this one comes with such a tempting blurb and … hello, can you say “gorgeous cover”? Considering all of those elements, I couldn’t wait to dive in. As it turned out, I really love this story. The characters pulled me in – and had me pulling for them – immediately and intensely.

After being taken out of active duty in the Peninsula War at Salamanca in July of 1812 by a severe injury to his leg, Captain Hugh Fanshawe has returned to London and found himself confronted by a fairly bleak and tedious existence. Due to the permanence of his injury, the military has placed Hugh in a clerical position at Horse Guards. That fact, combined with his station within his family – third born, and unwed son – has put him in the position of escorting his widowed mother and younger sister to the festivities of the season among those of the ton. Apparently the lameness he exhibited, when combined with his third-son status (read that as last in line for the family coiffures) made him fairly undesirable as a suitor in London society.

I took to Hugh right away and emphasized with his situation. He is the type of still waters runs deep character that I really connect with. Steadfast and resolute in duty to country and family, he was also somewhat resigned to leading his life as part of the background. Part of this came from living his entire life as the family’s third son, and younger brother to George (a member of the House of Lords) and James (a Major on Wellington’s personal staff). It didn’t help matters that Hugh had fair hair, different eye color and stronger features than his siblings, thus deeming himself unattractive. He never lacked confidence when leading men in battle but suffered a lack of it in social situations. I really wanted to throttle his mother for being more interested in finding a match for his sister, Sophia, than in Hugh’s well- being. She simply prattled on about this ball or that event and whether or not she felt Hugh was suitably attired and on time. Ack woman! And the brothers, George and James, such self-absorbed dismissive gits! I do believe they were well meaning but misguided. They constantly spoke of Hugh as being a dullard and slow on the uptake – totally clueless as to how Hugh felt like the odd man out all the time. Thank goodness Sophia was quite interestingly depicted as a fairly strong minded and loyal sister who was very close to Hugh, and not some simpering spoiled brat.

As Hugh makes the round of social events with his mother and Sophia, we meet his close friend, Emily, who is widowed. He knows her from his days at Eton where he was best friends with her brother. Of course Hugh is and always has been oblivious of Emily’s attraction to him. Men, sigh. No worries, as it becomes apparent to the reader, if not Hugh, that Emily has long ago deduced why he will never return her affections in a romantic manner. Or as she tells someone: “I rather think his interests lay elsewhere.” 😀 Which leads me to mention – the humor in this story is a treat! Many quips are traded between the characters, with Hugh possessing a particularly sharp wit. Emily was a most awesome character, she rocked her friendship with Hugh, and was a wonderful chaperone and confidant for Sophia. Far from meddlesome or grating, she worked her charms and her connections to benefit those she cared about.

So then, on to Theo. Mmm, yes, Theo. He certainly arrived with wonderful timing. Just when Hugh was feeling overcome with the tedium of life at Horse Guards, making small talk at balls (knowing that much of the interest in him was only due to the standing of his brothers), and oh yeah, trying without much success to ignore his carnal desire for other men. In walks tall dark and confident Colonel Theo Lindsay, resplendent in his green Rifles uniform, right into Hugh’s office and into his constant thoughts. Not merely for the obvious reasons – for Hugh has reason to fear Theo, given he had first seen the man at an exclusive, male clientele only, “coffeehouse”. It would seem Theo arrived at Horse Guards from the Peninsula to convey information to the Adjutant General, only to be kept waiting. He found his way to the office Hugh shared with another clerk, Courtenay, and started up conversation and plans to visit some London nightlife to keep him occupied until he could gain audience. Courtenay accompanied Theo to the clubs and hells, and Hugh kept running into Theo at society balls. Seemed the Colonel was from an aristocratic family, and even maintained fine lodgings in London.

The progression of Hugh and Theo’s relationship was very realistically paced and portrayed. I completely felt the conflicting emotions from Hugh when he realized that Theo shared his desire for men, and that Theo was indeed interested in him. Until then, Hugh’s only forays into acting on his desires had been limited, quick liaisons with camp whores while in the military. The two men had many conversations and Theo always treated Hugh as an equal and as a strong vital person rather than some sort of invalid. In fact one of the wonderful things he did for Hugh was introduce him to medical gymnastics – a precursor of modern physical therapy – to help alleviate his discomfort and lameness. (I actually looked this up and spent quite an interesting time reading more about the actual Dr. Ling mentioned in the story). Theo’s actions were uplifting to Hugh’s confidence and not at all patronizing – he was everything Hugh wanted and needed to fill the huge void in his life and his heart. Hugh found himself in love and not sure what to do about it. Right about this time, Hugh’s brother James tells him that the military suspects a spy is working inside Horse Guards, who is feeding information to the French. Hugh, although certainly not a dullard, does tend to see the best in everybody, and that works both for and against him as he cannot possible imagine somebody on the inside being a traitor.

Someone is indeed arrested for being the suspected spy but here I will leave the reader to discover all that happens next. Many of the plot twists – and there were several wonderful ones throughout this story – left me feeling so bad for Hugh as he had to work to uncover the truth. The secondary characters – especially Sophie and Emily – had interesting sub plots that were well woven into the entire story. While I wasn’t surprised at the ultimate big reveal, I was highly entertained at the journey to it. I had a grin a mile wide at one point when Theo went above and beyond with an ultimate grand gesture of devotion and faith that left me (and I believe Emily as well) swooning.

The only niggle I had with the story is that the depiction of Hugh as slow minded, dull, stupid etc. was inserted more often than I felt necessary to make the point of how he was viewed by many people in his life. I can see how they came to that conclusion (they being the true dullards) and it was somewhat key to the story, but it grated on me a bit. Anyway, their loss that they didn’t have Hugh more properly judged 😉

Regarding the sex scenes in this story, if you are looking for move by move, multi- page sex scenes, you won’t find them here. What you will find is a passionate feeling of intimacy and connection. With Theo and Hugh, the author uses what I found to be a very effective “less is more” with the descriptions of the sex itself. Detailed sex was not missed by me here, as the physical and emotional intimacy was very clearly portrayed by the on page thoughts and actions of the two men.

There is definite and plausible potential for a sequel, which is something I hope to see. I want to mention that so often in historicals, Regency stories in particular, we see the same type of base story trotted out – “the man who must put on a ruse of courting and or marrying a woman to keep up appearances, to produce an heir, etc etc”. It was so refreshing to get none of that in this story. I applaud the author for delivering a fresh, captivating plot and such wonderfully unique characters as Hugh and Theo. If you are fancying a highly entertaining historical story – you can’t go wrong here. 😀

← The Guy From Glamour
After The Hell →

4 thoughts on “A Minor Inconvenience”