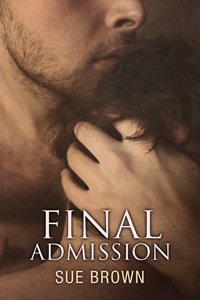 When Ethan Williams lands a job at Bingwell, Brock and Bacon, he realizes his coworkers aren’t exaggerating about James Trenchard. He really is a dick. But after Ethan is forced to work closely with James, he realizes there’s more to the lawyer than meets the eye.

Vibrant Ethan is a desperate reason to live again as James endures silent guilt and abuse from his husband after an accident. He calls Ethan for help after a beating, and stolen moments soon become the norm, but they can’t hide forever.

Ethan’s coworkers think he got his promotion because James is sweet on him, James is still being beaten despite his family’s concern, and the situation is swiftly becoming intolerable. Ethan and James need to find a way out of the cycle that’s hurting them both before their brand new love suffers as well.

Final Admission was a difficult book for me to review. It deals with a disturbing topic – domestic abuse. I went through many emotions while reading and, although the author leaves us with a positive ending, this may not be for everyone.

Ethan Williams is the new guy in the office. Even before he goes to his first company meeting, he has heard of the infamous James Trenchard, a man with a reputation as being a dick and an outrageous flirt. After some very inappropriate behavior towards Ethan by James at the meeting, Ethan is determined to stay away from him, even if he does find himself attracted to the man. He knows James is bad news. While Ethan is at a gay bar with his friends, he sees James. James makes it obvious he wants Ethan, but Ethan turns him down. Then at three o’clock in the morning, James calls for help, leading to some very troubling revelations about James and changing Ethan’s opinion of him.

James Trenchard is a successful attorney with a secret. He and his husband Clay were in an auto accident that left Clay with physical as well as mental problems. He has gradually become unstable and abusive, causing injuries to James so severe that James has been hospitalized multiple times in the last year. James is carrying a lot of guilt about the accident even though he had nothing to do with it. He also feels guilt that he is working at a job that had previously been offered to his husband before the accident.

Ethan takes care of James at the hospital and afterwards takes James home with him at his boss’s, James’ cousin, request. James turns to Ethan for comfort and they develop a relationship that is, at times, painful to read because of the abuse, the complication of James being married and James not willing to seek help for either himself or his husband. It was frustrating to see nothing being resolved. James would not allow anyone to press charges against Clay, but at the same time, no one was getting help for Clay, even as his violence turns almost deadly and is directed at others around him, not just James.

I thought the author handled the issue of domestic abuse well. It is not one that is easily resolved.

While the focus of the story is on James and Ethan there are secondary themes playing out with office politics and family dynamics. I know these themes were there to help build on why James behaved the way he did and how difficult it can be for everyone this abuse touches, whether the abused, the abuser, family or co-workers and friends. Discovering the abuse, then getting them the help they need meets with many obstacles as the story portrays.

I did find some of the inter office behavior and relationships to seem unrealistic in our day and age of sexual harassment awareness and workplace etiquette, as this seemed to be a large firm and those involved were trying to keep it secret. Overall, I enjoyed the story and how the abuse was resolved. The last two chapters centered on Ethan and James relationship after the abuse situation has been resolved, moved quickly and felt removed from the rest of the book. There were new problems introduced regarding business plans and trust issues, then the resolution to these in the last chapter felt much like the beginning of the book at least regarding the workplace behavior. Even so, I am glad the characters had a happy ending.

← Every Inch of the Way : Blog Hop
Sweet Sixteen, again … and again? →