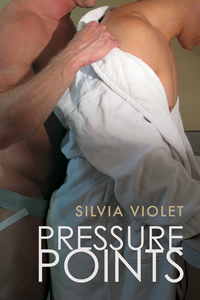 It’s hard enough being an inn manager, serving at everyone’s beck and call, making sure all the guests are happy and the employees are paid on time. Add to that being a werewolf, a recovering alcoholic, and a pack leader. Add to that a brother who is trying to tear the pack apart and a dark past he can’t escape. Needless to say, Carl is under a lot of stress. Not helping: Justin, the inn’s human massage therapist—who Carl is trying not to fall for—has offered Carl a massage to “lower his stress levels.” As his boss, Carl can’t tell Justin his hands might lower stress levels, but they would raise something else.

Despite Carl trying to put him off, Justin won’t give in. Carl’s friends won’t leave him alone, and the divisions in the pack are near exploding. And it’s tourist season. The last thing Carl needs are wolf wars in the lobby. Like it or not, Carl is going to have to rely on Justin and the wolves who love him to teach him how to let go and get through everything without falling apart.

I flipping loved Denying Yourself so of course I was going to read this. There’s no way I didn’t want to see Carl find his man after everything he went through. I don’t know that you HAVE to read the first book but you want to. Pressure Points was more of a traditional sexy shifter book. Definitely less heartbreaking than Denying Yourself. Less angsty, too.

Carl is a tortured soul. Mostly of his own doing. Being pack Alpha is a very important but stressful job. Then there’s the added responsibility of managing the resort and still struggling with his alcoholism. So, it’s a perfect set up to have someone with weight of the world on his shoulders fall for the carefree human who’s job it is to relieve tension. Carl is very attracted to Justin the summer season masseuse. He should stay away. Carl’s too messed up and casual sex with his employee pretty much screams disaster. Especially since it can never lead anywhere. Justin is one of those free spirits that floats from place to place. Then there’s the fact that the Alpha dating a human is seen as weak by some members of the pack. When Justin reciprocates the attraction there’s no denying the chemistry and passion the guys feel for each other. Carl tries to be clear that it’s just a fling but they both develop feelings. Not that either man admits it of course.

This was a very sexy read. I liked how growly and mine Carl was when it came to Justin. Even when he was trying to pretend it was just a casual thing. It’s one of those obvious to everyone but the one involved type of things but it really worked for Carl. He was so wrapped up in his duties and guilt for the way he abandoned his brother for the bottle, he can’t just accept something as simple as finding the one you love and living happily ever after. Hell, he tortures himself with not being able to keep Justin.

Justin is sexy and adorable. So easy going. He was a really good balance for Carl. I was a little worried one of the Moon parties was going to end in a manage of some sort but thankfully, for my tastes, it didn’t. It’s just not my thing. Justin was certainly up for whatever but Carl just couldn’t stand the thought of sharing him. Even though he’d been all about the free love that occurs at the parties before. This was the turning point of the book. Everything comes to a head at the Moon party. It was kind of intense waiting to see how Carl handled it all.

While I can’t say I LOVED this one like I did Denying Yourself it was a very good book. Very sexy and engaging shifter book. I’m really looking forward to Egan and Alex’s book. Egan is so intense and raw. There’s so much history between him and Alex we don’t know about yet. It’s going to be so good! I’m really wondering which of their POV’s it will be from. Either would be good for me. Looking forward to it. Another good read from this author!