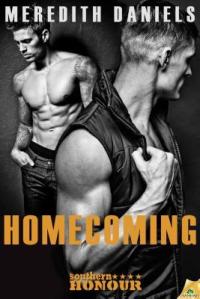 “Home is where his heart is once he recognizes what s in his heart.”

Broken in body, mind and spirit after a botched mission in Kuwait, elite Special Forces operative Jack Dresden returns to Devotion, Georgia, both dreading and longing to face his past. He left town on the receiving end of a wicked right hook thrown by the only person who ever made him feel he was right where he belonged.

Dillon Bluff was never good at pretending. Coming out right after high school, it hasn’t been easy dealing with the stigma of being gay in a small, Southern town. When he stumbles across Jack in the throes of a panic attack, one touch reignites the smoldering, hidden torch he’s always carried for his former best friend.

Jack knows he’s messed up, and the last thing he wants to do is hurt Dillon again. But Dillon is determined to take control and show Jack’s heart the way back home.

Warning: Contains a sexy, scarred Delta Force hero with the hots for his tattooed photojournalist prone-to-skinny-dipping ex-best friend. Threats of creative rope use and plenty of manly loving may leave the reader craving a cigarette and a man in uniform.

Jack Dresden is returning to Devotion, Georgia after a ten year absence. It’s not his choice. After capture and torture in Kuwait Jack is on medical leave. He’s come home to a dying father and a strained relationship with his former best friend. It doesn’t help that the former best friend, Dillon, is also Jack’s ex girlfriend’s brother and the man Jack has been in love with most of his life. Dillon was a refuge for Jack when his father’s unrealistic and slightly cruel expectations became too much for him. Unfortunately, the last time they saw each other it was with swinging fists involved. Jack doesn’t realize that Dillon has been heartbroken the past ten years over how they parted as he’s also been in love with Jack and had his own feelings of guilt at being in love with his sister’s boyfriend. Jack can’t escape Dillon and is doing his best to hide both his PTSD and his intense attraction to Dillon. At a welcome home party thrown by his mother, Jack is overwhelmed by the number of people in an enclosed space and goes outside to escape. He is followed by Dillon. Jack, while in panic mode, sort of forces himself on Dillon. Dillon is able to stop Jack before it goes too far and they agree to talk the next day. Jack wakes to breakfast and goes down to a breakfast with his parents and learns just how truly hateful and nasty his father really is.

While talking, Dillon and Jack learn more about each other and what has transpired over the years they haven’t’ been in contact. Mostly, Dillon comes to realize just how messed up Jack really is. After sex, Jack runs away. His intention is to spare Dillon from the disaster he’s become, and he really is a disaster. His PTSD is quite bad. What Jack didn’t realize was his mother has been aware of his feelings for Dillon his whole life despite his father’s opinions. She approves wholeheartedly. Now, Jack just needs to get over himself and see if Dillon is willing.

I felt this book had a lot of really good themes but didn’t necessarily pull them all together well. Jack and Dillon were both well crafted characters, but their decision making felt more tailored to the book’s length than actual human processes. As I said, I do feel there were a lot of really good themes in the book, particularly Jack’s feelings of living his life for the benefit of and at the mercy of others. His father and his father’s friends were a nasty bunch forcing others to play out their whims with potentially deadly consequences, and they did so without even the faintest hint of self awareness.

← Cole McGinnis Mysteries : Dirty Deeds
When All the World Sleeps →