When All the World Sleeps 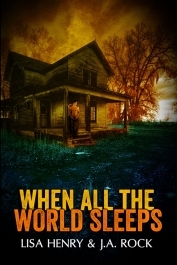 Title : When All the World Sleeps

Daniel Whitlock is terrified of going to sleep. And rightly so: he sleepwalks, with no awareness or memory of his actions. Including burning down Kenny Cooper’s house—with Kenny inside it—after Kenny brutally beat him for being gay. Back in the tiny town of Logan after serving his prison sentence, Daniel isolates himself in a cabin in the woods and chains himself to his bed at night.

Like the rest of Logan, local cop Joe Belman doesn’t believe Daniel’s absurd defense. But when Bel saves Daniel from a retaliatory fire, he discovers that Daniel might not be what everyone thinks: killer, liar, tweaker, freak. Bel agrees to control Daniel at night—for the sake of the other townsfolk. Daniel’s fascinating, but Bel’s not going there.

Yet as he’s drawn further into Daniel’s dark world, Bel finds that he likes being in charge. And submitting to Bel gives Daniel the only peace he’s ever known. But Daniel’s demons won’t leave him alone, and he’ll need Bel’s help to slay them once and for all—assuming Bel is willing to risk everything to stand by him.

Daniel Whitlock murdered Kenny Cooper. Joe “Bel” Belman doesn’t believe Daniel’s defense of sleepwalking but a jury did. Daniel is back in Logan and on parole after serving his time. Kenny Cooper’s friends and family are not happy to have Daniel in Logan. No one is really happy to have Daniel back in Logan. The whole town knows Kenny and his buddies beat Daniel almost to death for being gay, but Kenny was burned to death. Seeing Daniel walk around town is too much for some people. Because of the severity of his sleepwalking Daniel chains himself in bed and sleeps in short spans of time. While chained in his bed his cabin is set on fire. Bel happened to be there and was able to save Daniel. Despite his personal opinion of Daniel, Bel can see this is no way for a human to be forced to live. He agrees to watch over Daniel as he sleeps. After seeing what Daniel goes through in a night he can no longer doubt that Daniel had no awareness of his actions when he set Kenny Cooper’s home on fire. Bel can also no longer doubt Daniel is completely tortured by his dreams and actions on a nightly basis. Bel can also no longer deny that he thinks Daniel is beautiful and he wants to offer him comfort. Eventually, they find themselves both sleeping in the same bed. Romance ensues.

Daniel has always sleepwalked but hasn’t always gone looking for sex or committed crimes. When Daniel is more comfortable in general he tends to draw in his sleep. As Daniel and Bel become more and more involved in their relationship and begin to fall in love with each other Daniel’s nights become calm. Daniel begins to see a therapist. Despite improvements there are still significant problems. Daniel and Bel aren’t really able to have an open and public relationship. Bel has never hidden his sexuality but the small rural town of Logan isn’t aware of it. It would be brave for Bel to be the gay cop in a small town. It would be brave for Bel to be the cop dating a murderer in a small town. Being the gay cop dating a murderer in a small town may be too much. While Bel is dealing with that stress, Daniel is being threatened by the friends of Kenny Cooper. Daniel is also dealing with the fact he sleeps best when he’s been physically hurt to the point his body needs to recuperate. Bel isn’t willing to hurt Daniel like that as Daniel derives no enjoyment from it. Their problems come to a head when Daniel agrees to fight for the right to stay in Logan.

I have a soft spot for books that raise questions then leave the reader to answer them. Can someone be forgiven for a horrific crime? I think this question applies to both Kenny Cooper and Daniel Whitlock. It was hard to feel angry with Daniel knowing what he experienced at the hands of Kenny. Kenny was a horrendous person, but I can’t say he deserved to burn to death and know that was happening to him. Daniel’s guilt was valid and deserved. However; Daniel would have never hurt Kenny had Kenny not hurt him first. There are no right answers and families were torn apart by the questions. As a reader I wanted Daniel to be blameless. It’s easier when there is no glaring black mark upon a main character. I wanted there to be some great mystery to the story, and maybe Daniel didn’t set the fire that killed Kenny. Ultimately, Daniel is guilty and it’s a better book for it. The message that we have to accept our loved ones despite their faults resonates in this story.

This book was an interesting depiction of life in a small town. Everyone knows your story. It’s not okay to be different. If you want to be different it’s best to go to a bigger city where you can blend in better. Despite his problems with sleepwalking, it was Daniel who had left Logan and gone to college. Bel had lived his whole life in Logan and had no plans to leave until he began a relationship with Daniel. There is great comfort in staying in a familiar and safe place your whole life. One of the central questions of the this book was when is the right time to leave a place that isn’t ever going to rally around you despite the fact you’re also one of their own. Daniel’s life was so glaringly unfair! It was unfair but not all bad. Daniel and Bel were actually quite happy when left to their own devices. Their sex life was certainly fantastic.

2 thoughts on “When All the World Sleeps”