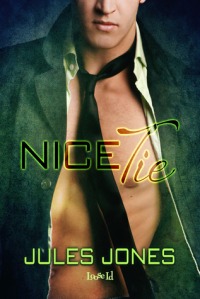 Alex Hall likes watching good-looking men doing up good-looking ties, a kink he can safely indulge on his morning commute as long as he’s discreet. At least until the day he meets new client Robin Wood, whose face seems oddly familiar. Embarrassingly familiar, when Robin recognizes him as “that guy on the bus.”

Lusting after the client and his tie is a really bad idea. Acting on it would be even worse. Which doesn’t stop Alex’s impulsive suggestion when he realizes that Robin’s as intrigued as he is awkward. They’re both grown-ups, they can handle the conflict of interest, and if nothing else it will get the awkwardness out of the way. And there’s a cheap hotel at the end of their bus route.

Just one date. One night for Alex to enjoy watching beautiful hands managing a tie with style. One night for Robin with a man who can understand his own grooming kink, even if it’s not quite the same as Alex’s. One night, and then just good friends, while they’re working together. Nobody else’s business.

But Robin has entirely too much experience with romance at work, and the past isn’t staying past.

Alex Hall has spent a few mornings doing his best to unobtrusively watch a good looking man on the bus straighten and adjust his tie. Alex isn’t trying to be creepy or anything, he’s just a bit of a tie kink. Not in the bondage sense, but he likes to watch a man become the professional he’s going to be for the day and tying the tie is the ultimate act of the process. When a familiar looking man ends up in Alex’s office for business, Alex is slightly horrified when he learns it’s the man who ties his tie on the bus and Alex has most certainly been observed watching and enjoying the process. It’s not okay to lust after the client, so Alex and Robin do their best to stick to business. While both of them are out of the office Alex asks Robin if he’d be willing to speak to him over pastries. To clear the air, so to speak. Robin has recently moved to the area and is interested in places to eat and interesting local sights. One thing the men agree to do is have a night at a hotel. In an effort to get the awkwardness out of their systems. They enjoy the sex but find themselves enjoying the companionship much more. Alex also learns Robin has his own grooming kink. However, the guys realize it’s best if they only socialize as friends. Robin has just moved to town and it’s a conflict of interests for them to date while their respective companies are working with each other.

Alex and Robin become great friends and enjoy having lunch and visiting museums together. When Robin’s ex-boyfriend comes back into the picture all that has to stop. When seeing each other for work Alex can clearly see Robin is not doing well. He’s exhausted and unhappy as well as being kept from activities of his own choosing. When visiting with a friend at a local pub Alex sees Robin out with his friends and notices his boyfriend blatantly picking up another man and claiming polyamory as the reason for being such a creep. Alex and Robin return to Robin’s apartment for some revenge sex. The next morning when the creepy boyfriend returns he’s not at all happy to see another man there. He’s also not at all happy to learn he’s being kicked out for good. He threatens to make both men sorry. Unfortunately, he didn’t take into account the incident was being recorded.

I didn’t find this story to be romantic. Alex and Robin built a strong and solid friendship which is the basis for a long term relationship, but the two men didn’t really appear to have seriously romantic feelings for each other. They became friends who had sex a couple of times. Whereas there is great potential to start a serious romance from a friendship, these two guys just were not there at all. I also felt the reasoning behind the boyfriends behavior was possible but not plausible. The interactions between Alex and Robin had a nice, mundane and realistic feel to them and out of left field there is a big, gorgeous, over the top bastard of a boyfriend. It ended up feeling contrived for me and out of place with the rest of the storytelling.