Missed Connections : I Swear to You 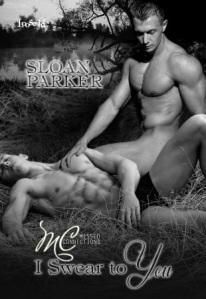 TITLE : Missed Connections : I Swear to You

When roommates Grady and Mateo give in to their growing lust, it’s the best sexual experience of their lives. But are they really gay? Is this just sex or something more? It takes time for confused Grady to figure that out, but once he does, he’s determined to have all of Mateo. Too bad tracking down brokenhearted Mateo proves impossible.

The story starts off six years in the past. We have two college guys who have been friends since first grade, guys who have been there for each other all of their lives. When Mateo finds his girlfriend cheating on him, Grady takes him to his family’s lake house to get away from it all. Things between the two of them take an unexpected turn and before things can really take off the prologue ends. I was left thinking what the heck? I wanted to know what happened next. So….. I kept reading. 🙂

Present day and Grady is at his very first gay pride parade. He’s pretty much just looking for someone to hook up with. It’s been six years since the one person he truly wanted the most disappeared from his life, and after dating many woman and having a few failed marriages, he has decided it’s time to be who he is and come out of the closet. He just never expected to see Mateo across the street from him at a pride parade and by the look on Mateo’s face, he never expected to see Grady either. So, of course, what do you do when you see the one person who gutted you? Run like hell! Which is exactly what Mateo did. Now, Grady may be fast but Mateo is Houdini because one minute he’s there and the next he’s gone. It doesn’t take long for Grady to put things in motion to try to draw Mateo out of hiding. He posted a message on Facebook and then on Craigslist. He didn’t have high hopes but when he got the call he was waiting for it was not what he was hoping to hear. Mateo told him to take down that post and hung up. Now, he can’t be letting Mateo go that easy, so he enlists his brother Riley to do some digging and what comes back is very puzzling. Mateo’s life has been pretty much erased and there is just one old address and Grady is on a mission to find the one man he wants more than anything in life.

When Grady finally finds Mateo, he begs for one chance. One chance, and one weekend to try to mend the pain and hurt. You learn a lot about these two. You learn what happened six years ago and how that one painful event changed things so much for Mateo.

I’m having trouble finding the words that can express how I feel about this book. I enjoyed it. The sex scenes were hot and emotionally intense. I just thought the ending wrapped up too quickly for what was a secondary plot, sorta, in a didn’t-speak-of-it-till-it-was-almost-on-top-of-you kind of way. And, now I sound crazy. 🙂 But seriously, it was pretty much not talked about until it was almost time for it to happen. Other than that, it was a good read. I always enjoy Sloan Parker’s books. She just has a way with her writing that I truly enjoy.

One thought on “Missed Connections : I Swear to You”