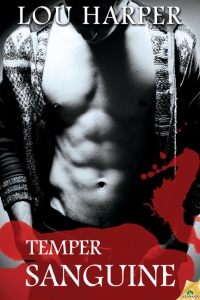 Gabe Vadas’s slayer ancestors would be spinning in their graves if they knew that not only is his boss a vampire, so is his lover. But that lover, Harvey Feng, is cooking something up in his lab that he seems reluctant to disclose.

The secrets they keep from each other and the nightmares they share are driving a wedge between them.

Harvey fell off the vegetarian wagon with one taste of his lover s blood. Except recently it s been having some unusual and disturbing side effects. And he fears their connection has awakened something dark and dangerous.

Sent to New York City to help the new top vamp clean up the mess the old one left behind, Gabe finds more than a few stray feral vampires. A doctor with a dubious history is hell-bent on creating a new race of unkillable bloodsuckers.

The investigation takes Gabe and Harvey across an ocean, and deep into the past. Where they discover demons that have the power to reach across the centuries to destroy them both.

I love a good vampire book. This one I actually think I liked a little better than the first one which I really liked. I like how dangerous yet approachable some of the vamps are. The colorful characters that make up the casts of these are so much fun to read about. And I love the MCs! You’ve got to be curious about a wannabe vegetarian vampire who falls for a vampire slayer. That alone would make me want to pick this up. I also really enjoy this author’s subtle humor and witty dialogue.

Temper Sanguine once again follows Gabe and Harvey. In this book they’re moving in together and working out the kinks that come with that kind of commitment. Gabe has never had more than hook ups and Harvey hasn’t had anyone since he was turned. Harvey expresses his love for Gabe openly but Gabe has a harder time saying the words or admitting it to himself. His history with losing family members and betrayal by others leaves him uncomfortable with getting in touch with those types of feelings. He’s been hardened in a way but Harvey is his everything and that’s taking some getting used to.

Gabe is still working for the mob like vampire boss of the city. Whom I’ve decided I like. I love when authors give me a seemingly bad guy that I actually like. While at the same time keeps me guessing if I can trust him and if he’ll once again use the MCs as pawns in a greater scheme. In this book the situation from Vegas leads them to another situation brewing. So, Gabe and Harvey are dispatched or as Gabe sees it, he lends his pet slayer to the vamps of NYC.

Here they uncover more than they thought. Somebody has been purposely making Ferals but why? Things get dark and twisted. Like experimenting on humans in another hospital twisted. They uncover a lot but are sent home without any answers.

Eventually they’re sent over to Budapest to find a foe that is so evil they still tell stories about him. I think I loved this part of the book the most. The characters had me laughing while dreading the moment Gabe and Harvey have to confront the evil monster they’ve been sent to destroy.

I think I enjoyed this book more because there was more action. More chase scenes and fighting. More excitement. More romance. More humor. A bigger badder foe. Darker. I just loved every minute of it. Really good read that I highly recommend this one but only after you’ve read the first. These must be read in order.