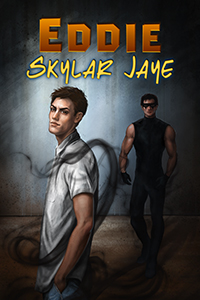 Kidnapped. Again. Honestly, Eddie Goodman isn’t surprised. As the son of crime-fighting superheroes with no powers of his own, he’s used to living with a target on his back. Now, the League of Evil has him in their clutches once more. However, Eddie’s not familiar with this particular villain, whose name seems to echo the shadows he controls. Shadow isn’t as disgusting as the others, like the fiendish Duke Naughty who’s been after Eddie for a long time. With a master’s degree in Psychology, Eddie calls on his talent to analyze the mind of this new supervillain and finds he’s not so evil, just a little… dark.

When Shadow saves Eddie from those intending him harm, blurring the lines between good and evil, Eddie realizes battling this new enemy—and his growing infatuation with the enigmatic man—won’t be easy. As Eddie struggles to understand Shadow’s motivations and his own feelings, he realizes Shadow is exactly the kind of Dominant he’d usually go for, and worse yet, Shadow seems to sense Eddie’s submissive nature. Eddie’s mind might not want to submit to a supervillain, but his body certainly does.

I love superhero books so I just had to read this one. It was also a new to me author and I’m always up to try out something new. There is some very light BDSM. I’d say it’s mostly Eddie likes to submit with restrictions. Shadow’s superpower abilities and dominant behavior favor this part of the story. The story is told from Eddie’s POV only so there is quite of bit of trepidation, analyzing and consideration over Shadow and his true self through little glimpses into the man behind the mask. Eddie has a degree in Psychology and isn’t afraid to use it. 😉

Eddie is the only one in his very high profile, almost royalty in the superhero world, family. It puts a BIG target on his head. He’s continuously kidnapped by one of the members of the League of Evil, an organized group of supervillains. There’s also a council of Superheroes. Despite his many kidnappings, Eddie lives a pretty normal life. Until he finds himself once again a captive of a villain named Shadow. It’s not one he’s ever seen before. There are shadows that seem to do his bidding. A couple of escape attempts prove getting away this time won’t be an option and he agrees under the threat of his friend to remain hidden away with Shadow.

Things are going really well until the King baddie decides he’s tired of hunting for Eddie and takes things into his own hands. Essentially forcing Eddie to come out of hiding.

There were parts I really liked but there were also parts really hit on some of my personal pet peeves in books. Mainly, Eddie’s character. Everyone loved him and he made many silly choices putting everyone in danger. Yes I know this set up the big stand off but by that point of the story I think I’m the only person in the book who doesn’t adore Eddie. We also seemed to lose some of Shadow, the most intriguing character IMO, towards the end of the book. He’s just not on page as much.

The baddies were pretty awful and again I like the made up personas and powers of them. A super baddie is just so much fun to hate. There was a part with Eddie’s friend Lycas towards the end of the book that I honestly have no idea why it was in the book. It came out of no where and really felt disconnected to the storyline.

The beginning of Eddie and Shadow’s relationship was a fun struggle to read about. I liked how Shadow was dark and mysterious. Maybe a little scary at first. Some of the sex scenes were pretty damn hot. The relationship went from yearning tension to sweet as the book went on. The battle scenes were engaging.

So this was a pretty good read. I liked the first half more than the rest. If you’re into superheroes or a captive falling for his captor you would probably enjoy this one. I see it’s the beginning of a series. Wonder what else is to come?

← A Change of Tune
Better Than Friends →