Sequel to Whiskey and Wry (and The Devil’s Brew) Sinners Series: Book Three

Hey! I am Rhys Ford and I’ll be taking over this blog today … sort of. There’s really no cool way of introducing yourself on someone else’s blog and honestly, if you’re following this series of shorts, you’re going to be sick of reading this. So… feel free to jump down to the meaty bits of the short if you like. Go on. I won’t mind.

Now, if you’ve been following the Sinners Series, I am happy to say the third book is either on the brink of coming out or out by the time this post hits. It is called Tequila Mockingbird and features Connor Morgan as he discovers he’s in love with a drummer—a guy drummer. Murder, mayhem, sexing, etc. All of those follow. You know the drill. But wooot! I am very happy to announce Connor’s story.

To celebrate, I’ve written a short serialized string of vignettes titled Hair of the Dog. Please enjoy the story as it goes along. The order of the posts is included at the bottom of the short. Hope you enjoy it.

Oh…and Giveaway! Would you like to win…. Drum roll…..

Any ebook from my backlist

Hair of the Dog • Part Two 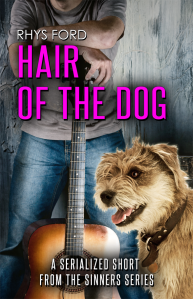 The dead squirrel was the final straw.

Okay, stepping in it had been the final straw but that counted as finding it, especially when the thing squeaked and spurted when Miki’s foot came down on its slightly depressed corpse.

“Fuck! Shit.” His howl echoed through the empty half of the garage and Miki hopped off the squirrel, shaking his foot. Turning, he banged his elbow on the garage door, rattling its slats and sending a shockwave of pain up his arm. Unbalanced, his bad knee gave and he went down, slapping the concrete floor in an inelegant sprawl. The ache in his elbow was nothing compared to the twisting anguish coming up his leg to grab at the base of his neck, a devastating ripple through his nerves.

To add insult to injury, the squirrel’s remains still clung to his bare foot, its gummy flesh poking out between his toes.

More importantly, the bringer of the dead rodent sat there laughing at him, his pink tongue curled up like a one-finger salute poking out of his panting mouth.

“Dude, really?” Miki shook his foot, adding another layer of pain to his already aching knee. The squirrel remained lodged between his toes and he spread them as wide as he could, shaking harder.

The damned dead thing was as stubborn as the dog who now seemed to live with him.

“You see this thing on my foot? What the fuck is this? Shit, now I’ve got to touch it.” Miki debated how long he could lie there with a dead squirrel stuck to his foot before someone found him. “Yeah, the answer to that is fucking forever ‘cause no one gives a shit about you, Sinjun.”

He regretted using that old nickname instantly and the pain began again, rushing into his blood with a poisonous sting. No one called him that any more. Hell, even Edie said Miki or even St. John when she was annoyed with him. Sinjun was dead. As dead as the men who’d once called him that.

God fucking damn it, he missed Damie so much. There wasn’t anyone to tell him it was okay that he woke up in the middle of the night shivering from fear. He missed being held. He missed being able to go down a hallway or across a room to find someone to anchor him to the now. Without the others, he was lost and…drowning.

He was drowning so much and nothing Miki did seemed to get him closer to shore.

There were some days…most days…when he felt like going under, just so it would all stop.

“You do that, and that bitch family of his is going to get Damie’s shit. Next thing you know, they’ll be selling tampons and mineral water with our crap.” Miki sniffed, his nose clogging up too tightly for him to breathe. “Fuck it, Damie. Why’d you have to leave me here? Why couldn’t you have been the one to stay? You could have done this fucking shit without me because I sure as shit can’t do it without you.”

Something tugged at his foot and he blinked, wiping away the tears in his eyes to look. Oddly, the terrier had the squirrel’s rather flat tail in his mouth and was tugging its dead prize off of Miki’s foot. Dropping his stench-laden gift onto the floor, the dog trotted over to Miki’s side and swiped at Miki’s tears with his slobbering tongue.

Miki laughed despite himself then gagged, pushing the dog away gently. “Oh no, Dude. You just had a mouth of squirrel ass. No fucking way that’s coming near me. Never ass to face. Never.”

Sequel to Whiskey and Wry (and The Devil’s Brew) Sinners Series: Book Three Lieutenant Connor Morgan of SFPD’s SWAT division wasn’t looking for love. Especially not in a man. His life plan didn’t include one Forest Ackerman, a brown-eyed, blond drummer who’s as sexy as he is trouble. His family depends on him to be like his father, a solid pillar of strength who’ll one day lead the Morgan clan.

No, Connor has everything worked out—a career in law enforcement, a nice house, and a family. Instead, he finds a murdered man while on a drug raid and loses his heart comforting the man’s adopted son. It wasn’t like he’d never thought about men — it’s just loving one doesn’t fit into his plans.

Forest Ackerman certainly doesn’t need to be lusting after a straight cop, even if Connor Morgan is everywhere he looks, especially after Frank’s death. He’s just talked himself out of lusting for the brawny cop when his coffee shop becomes a war zone and Connor Morgan steps in to save him.

Whoever killed his father seems intent on Forest joining him in the afterlife. As the killer moves closer to achieving his goal, Forest tangles with Connor Morgan and is left wondering what he’ll lose first—his life or his heart.

Also available on Amazon, Are and other online book stores.

Follow all of “Hair of the Dog” at these blog spots 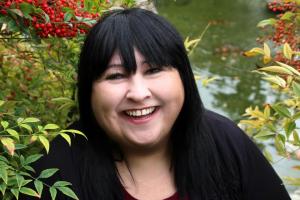 Rhys Ford was born and raised in Hawai’i then wandered off to see the world. After chewing through a pile of books, a lot of odd food, and a stray boyfriend or two, Rhys eventually landed in San Diego, which is a very nice place but seriously needs more rain.

Rhys admits to sharing the house with three cats, a black Pomeranian puffball, a bonsai wolfhound, and a ginger cairn terrorist. Rhys is also enslaved to the upkeep of a 1979 Pontiac Firebird, a Toshiba laptop, and a red Hamilton Beach coffee maker.

Check out what Rhys is up to now by visiting her site rhysford.com