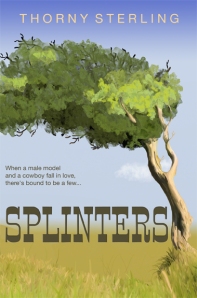 Publisher : Self Published (BUY IT HERE)

Waking up in a strange place isn’t a first for model and actor Allan Seville, but discovering himself alone and bound to a rough plank in the middle of an open Texas range certainly is. With no memory of who did this to him or why, panic sets in, until rescue comes riding up on a big, brown horse.

There’s more to Duke Walters than a handsome face and sexy drawl. In the arms of this rugged cowboy, Al discovers a peace and safety he never knew he needed, and now doesn’t want to be without.

But someone wants Al out of the way and drugging him during a movie junket in Houston is only the beginning. A world of differences may separate this cowboy and diva, but when danger strikes again, Duke might be the only one who can get them out alive.

Twenty-three year old Allan Seville has an amazing life, one that he’s worked hard for. He rocks the androgynous look, ensuring his modelling career is in great shape, and his first movie has just come out. Sure it may not be a main part, but it’s a great step forward and he’s enjoying his inclusion in the movie’s press junket. While in Texas for work, Allan wakes to find he’s been abducted and left trussed in the middle of a field and no memory of how that could have possible come to pass.

Thirty-five year old Duke Walter is the handsome, kind-hearted Texas cowboy who’s field Allan has been left in. When he stumbles across Allan and rescues him, it becomes obvious quite quickly that there is great chemistry between them.

Splinters opening pages do an amazing job of painting the scene of Allan’s predicament in vivid detail. I could really see it in mind. That first chapter grabbed my interest and put me smack bang in the middle of Allan’s story right from the start. With the opening premise, this story could have been quite dark – had it been the story’s focus – but this is first and foremost a delightful romance between city-boy Allan and rugged cowboy Duke.

The touches of humour and the flirting between Allan and Duke were thoroughly enjoyable and kept the story firmly as a sweet romance with a side of mystery. I absolutely adored Allan. He’s fun, open-hearted, unpretentious, unabashed in his femme tendencies and completely comfortable in his own skin. It really was a real joy to be in his head. And speaking of Allan being a femme man, I really liked how the author brought the truth of that into the character. Says Allan, “Femme men like myself catch hell all the time for being ourselves, even from within the gay community. Perhaps this was an opportunity to shine a light on our struggles and also our resilience”. I really liked how this was done. It shines a light on an issue while staying in the framework of the story. It doesn’t bludgeon the reader with it, but states it very well while keeping in character.

Allan’s best friend and agent, Elsie is a fantastic secondary character. I could totally believe their firm friendship and loved Elsie’s strength, sass and sense of humour. They made a great team and there is some hilarious banter with them.

As far as the mystery goes, it’s pretty obvious who the culprit is reasonably early on. And that’s okay, because it’s truly the romance that is the focus. The mystery is the vehicle to achieve that, and it does the job very well.

The move from the story’s set-up into the romance felt a little abrupt for me. One second it’s about working out what had happened to Al and acknowledging that Duke’s attractive, with some fun flirting and then it’s suddenly speeding into serious romance territory. The story still remained interesting, the writing very good and I was enjoying it, but the transition from first meeting to romance could have done with a little more time and fleshing out. When Allan had to head back home, I did feel for them, but it would have had even greater impact if there’d been more of a chance to get to know Duke in order to get a true sense of who he was and for them as a couple. Al may have felt as though he had known Duke forever after less than a day, but I didn’t get enough of them together to feel that too. And I really wanted to, because what I did see, I really loved. And the Oh My God smokin’ hot sex! Those sex scenes were wonderful. Sweet, sexy and passionate, I liked how the author got the emotion in them as well as the steaminess. It wasn’t only about the wham, bam but also highlighted the connection the characters felt towards each other. Towards the end, I did get the connection with Duke I was wanting. There were some really sweet moments between those two and I thought it had a really nice ending. It didn’t feel rushed, and there was good resolution without feeling like everything was too neatly ties up with a bow.

It’s written in present tense, but it’s written the right way, where it doesn’t feel awkward and contrived, but instead is organic and puts the reader squarely in the action.

While the transition from the story’s set-up to the beginning of the romance element was a little abrupt, that was really the only thing worth mentioning in what is really an outstanding debut novel with top notch writing and a delightfully well-developed MC. I very much look forward to what this new author will do in the future. And special mention needs to made about the gorgeous cover art. Not only does it have a specific tie to the story, but it was also painted by the author. Overall, Splinters is a very impressive start to what I hope is a successful writing career.

← Fight
LYLBTB Epilogue … to be continued →

One thought on “Splinters”