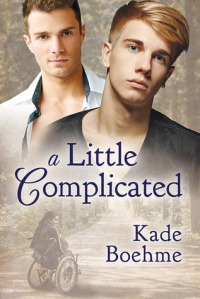 Ryan Borja met the guy of his dreams in college. Brady Novak was kind, responsible and easy on the eyes. Yeah, the guy had a kid but Ryan loved her too. What could go wrong? Well, Ryan’s sister Ellie, that’s what. Ellie is a flighty, love-em-and-leave-em kinda girl with a big heart who doesn’t realize she dated the guy Ryan had fantasized about. But, like all of Ellie’s other relationships, this one ended within two months, just in time to send Brady running off to take a job in Phoenix, taking Ryan’s heart with him.

Ryan never thought he’d see Brady again until eight years later Ryan’s sister blindsides him by announcing that not only is Brady back in Atlanta but she’d asked him out on a date. And he’d accepted. As if that wasn’t enough to send Ryan on a tailspin, a neighborhood girl brings him face to face with Brady in an unexpected way.

Brady can’t believe when he sees Ryan again. He assumed Ryan had moved on from Atlanta, like he’d always said he would. But Brady hasn’t forgotten his cute, nerdy friend and wants nothing more than to have a chance to try the relationship they never got to have all those years ago, but convincing Ryan that he hadn’t slept with Ellie proves difficult. Ryan is still hurt over the way they left things and makes it an uphill battle, but Brady has waited too long. He’ll damn well give a good go of trying to get his man and with the help of his precocious teenage daughter and a little help from friends they may just get their Happily Ever After.

This was a really cute story that dealt with one of life’s eternal complications…. the old “who saw him first” conundrum 😛 Friends have that unwritten law about never, ever going remotely close to someone that a friend fancies, but what about family? Isn’t it just the worst scenario to fancy a guy that your sister fancies? You’d think a brother and sister may be safe from this little problem, but factor in the minor detail of sexual orientation and all of a sudden things get helluva complicated!!

Ryan met Brady 8 years ago at college. The attraction was instant and mutual. Brady was a single dad, so (of course) Ryan jumped to the wrong conclusion and assumed he was therefore straight. It never really occurred to him that Brady could be bi. Brady, sadly, never really tried to convince him otherwise – despite the fact that the more time they spent together, the bigger the attraction became. Then the worst of the worst happens …. Brady meets this “bangin’ chick” … yep, it is Ryan’s sister Ellie. The three of them strike up this weird friendship – like a mutual appreciation society – but he saw him first, dammit! See what I mean?? Com.Plicated!! Brady knows that Ellie isn’t for him so he isn’t exactly heart broken when she dumps him. And off to Phoenix it is, for Brady and his daughter… on his last night in town he finally gets to make out with the guy that has been his crush for the last 3 months!! Yes. Ryan. Of course they both feel guilty as hell so don’t stay in touch – and now 8 years later Brady is back in town. Naturally Ellie wants a second crack at the one that got away. Will Ryan ever tell her that he also fancied him, and that he saw him first, dammit! Plus Ryan is just such a nice guy – who honestly wants his sister to be happy, forgoing his own shot at happiness, even. But dammit Ryan…. YOU SAW HIM FIRST!!! CLAIM HIM!!! 😛

The rest of the story I will leave for you to discover – it is a lot of fun though!

I really liked this story and was saddened to see that for some reason the book has been removed from some book sellers – I am not going to lie; there were some pretty bad errors in the book. Wrong names or words being used, but these errors should have been picked up by people that proof read or even the beta readers – not all the blame can be laid on the author, how often do you spot other peoples mistakes, and skim over your own? I would hate for this author to feel discouraged and to stop writing, as he really has a wonderful writing style – just maybe check, check and check again before putting the book out to an often nasty and vindictive reading public.